A Conversation on Race, Justice, and Reparations in Response to Police Violence —with members of Chicago Torture Justice Memorials 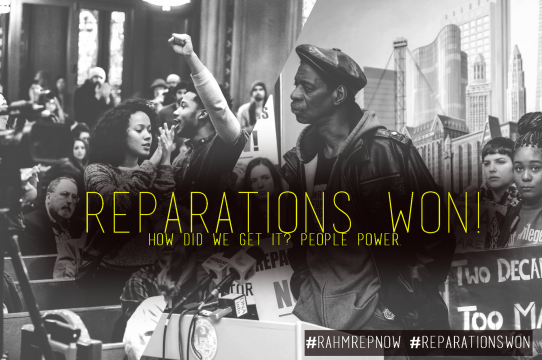 A Conversation on Race, Justice, and Reparations in Response to Police Violence —with members of Chicago Torture Justice Memorials: February 3 & 4, 2017 at the University of California, Santa Cruz

Presentation and discussion on the history of Chicago police torture, the struggles against it, the CTJM project, and the Reparations campaign

Chicago Torture Justice Memorials (CTJM) is a collective of artists, activists, and attorneys that organized for, and won—in alliance with We Charge Genocide, Project NIA, Amnesty International, and Black Youth Project—historic Reparations legislation for African Americans tortured by Chicago police.

This two-part event will bring four members of CTJM to the UCSC campus to discuss the social and historical context of police torture in Chicago and how the group achieved a historic victory in securing reparations for survivors of torture and their families. CTJM members will also facilitate a workshop and conversation on organizing for racial justice and against police and other state-sanctioned violence now, engaging art, social media, collaboration, direct action, and other temporal- and location-specific strategies.

For more information on the event, please visit SPARC's webpage:

for more information on CTJM:

Dorothy I. Burge is Program Director and Internship Coordinator for the Associated Colleges of the Midwest, where she also teaches seminars on systematic racism, criminal justice and social problems. Ms. Burge conducts workshops for a wide variety of audiences, including colleges, high schools, student organizations, social service agencies, and religious and community-based organizations on anti-racism and the criminal justice system, among other topics. She is known for her interactive style that provides theory and validates the life experiences of the participants.

Darrell Cannon is a former prisoner and survivor of torture by Chicago police. Mr. Cannon spent 24 years in prison based on a false confession that was procured by torture. Since his exoneration in 2004 and eventual release in 2007, Mr. Cannon has been an outspoken advocate for justice for torture survivors and other victims of racialized police violence. He has spoken about his experience and the movement for justice for all survivors at venues throughout Chicago and around the U.S., including at the Allied Media Conference in Detroit and Moore College's Art and Social Practice program in Philadelphia.

Alice Kim is an educator, cultural organizer, activist, and writer. She teaches and develops curriculum for the Gender and Women’s Studies program and Social Justice Initiative at the University of Illinois at Chicago. Ms. Kim was previously the Director of The Public Square, a program of the Illinois Humanities Council that creates spaces for public conversations about social, political and cultural issues. A long-time death penalty and prison abolitionist, Alice also worked as the Program Director for the Campaign to End the Death Penalty.

Janaé E. Bonsu is an activist, organizer and social work Ph.D. student at the University of Illinois Chicago. She currently serves as the National Public Policy Chair of Black Youth Project 100 (BYP100), an activist member-led organization of Black 18-35 year olds dedicated to creating justice and freedom through a Black queer feminist lens. Janaé has co-authored BYP100’s public policy agendas – the Agenda to Keep Us Safe and the Agenda to Build Black Futures. She is also a member of the Movement for Black Lives (M4BL) Policy Table that produced the Vision for Black Lives platform. Janaé is dedicated to building a world free of punitive state systems.