Dana Hemenway: All That Glows Sees 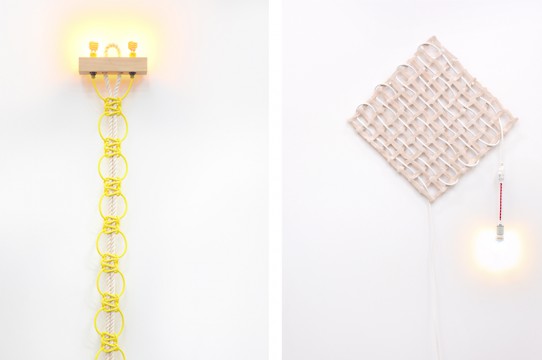 Hemenway will be installing her exhibit.

The public is welcome to enter the gallery and observe the process.

A lighted lamp in the window

watches in the secret heart of night

of a gaze imprisoned

between its four stone walls.

- Christiane Barucoa (from The Poetics of Space by Gaston Bachelard)

The title, All That Glows Sees, is taken from a passage in The Poetics of Space by Gaston Bachelard, in which he describes the personification of the home via the light that glows inside it. He suggests that the light emanating from windows at night could been seen as eyes, looking and waiting, vigilant for what transpires outside of itself: “The lamp in the window is the house’s eye and, in the kingdom of the imagination, it is never lighted out-of-doors, but is enclosed light, which can only filter to the outside.”

In her first solo exhibition with Eleanor Harwood Gallery, Hemenway continues her investigation of extension cords as aesthetically manipulated objects. Over the past three years Hemenway has employed the craft technique of macramé using extension cords, elevating and transforming the object’s value beyond the scope of its functionality. These works question the boundaries that exist when classifying objects and the ease in which value and meaning can be transformed via context. Further complicating classification, the extension cords remain true to their original function as they are also used to power lightbulbs.

The works in All That Glows Sees originated during Hemenway’s residency at the Bemis Center for Contemporary Art in Omaha, NE. During this time she made Untitled (Cord Grid No. 1) in which a single extension cord is woven through a handmade ceramic grid made of woven and flattened clay, juxtaposing the fragile process-oriented ceramics with the mass-produced, often overlooked industrial cord. Included in the show are a variety of approaches to this same objective: creating tension between natural and often hand-crafted materials and massproduced machine made objects, as well as between design-oriented materials such as fabric covered cords and industrial items manufactured without regard for their aesthetic appeal. As the work developed she began to look at each sculpture as a reference to different lighting in the built environment, the ceramic grid works became flattened and abstracted side table lamps (often made with a ceramic base), hanging works seen as stand-ins for chandeliers, wallmounted pieces as wall sconces, and works that integrate the cords into drywall as built-in fixtures.

In past works, the cords powered bulbs partly to push the idea to its rational end, use the cords to power something— anything. They also reference historical works by artists who utilized light and put into question the notion of authorship through the unmanipulated use of found objects (namely Felix Gonzales Torres’ light bulbs strings, and Dan Flavin’s fluorescent light works). All that Glows Sees explores the agency of lighting further by considering how by providing a function, these sculptures exist between the classifications of art and design, and where they might become analogous to recognizable forms of lighting––wall sconces, chandeliers, side table lamps, and built-in or recessed lighting.

Hemenway’s practice is a search for the precise moment in which an object is imbued with meaning—is it the instant a power switch is flicked ON? A search for the point that value is transferred—the moment the work is mounted on the wall? Or perhaps the moment the artist deems the work complete and the sum becomes larger than the individual parts combined? Her art occupies the liminal space in between. As the exhibition title suggests, the works in All That Glows Sees have agency - they give us cause to think about what we might overlook and how it might look back at us.

Dana Hemenway is an artist and curator based in San Francisco, CA. She is interested in the aesthetics of context and display; the resulting work ranges from sculpture to video to sitespecific installation. Dana received her MFA in 2010 from Mills College. She has had residencies at the Bemis Center for Contemporary Art (Omaha, NE), Root Division (San Francisco, CA) and is a charter resident of the Minnesota Street Project's Studio Program (San Francisco, CA). Dana has exhibited her artwork locally, nationally, and internationally. Her work has been reviewed in Art Practical, San Francisco Magazine, the San Francisco Chronicle, ÆQAI, ARTSlant, among others. Dana is currently a co-director at Royal Nonesuch Gallery, an artist-run project space in Oakland, CA .

The Eleanor Harwood Gallery opened September 2006. The programming of the gallery focuses on emerging to mid-career artists exhibiting nationally and internationally. The roster includes artists that are represented in major American and European collections. The gallery actively promotes and encourages career growth for represented artists.