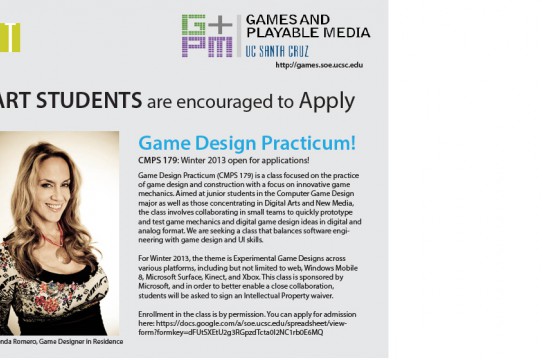 The Center for Games and Playable Media at the University of California, Santa Cruz, has appointed Brenda Romero (formerly Brenda Brathwaite) as a game designer in residence, the first such position on a UC campus. An award-winning game designer, Romero is co-founder and chief operating officer of Loot Drop, Inc., where she plans to continue working on game titles currently in development.

The new Game Designer in Residence program brings a leading game designer to UCSC to teach courses and serve as an adviser and resource for game design students, faculty, and researchers on campus. The one-year, 80-percent appointment includes teaching foundational courses in game design, giving students an unequaled opportunity to learn directly from an expert practitioner. Romero's appointment starts January 1, 2013.

"It is tremendously exciting to have Brenda Romero as UCSC's first game designer in residence," said Jim Whitehead, professor and chair of computer science in the Baskin School of Engineering. "She brings to the position over 30 years of experience in game design and an extensive understanding of the business of games, and she is an innovator in the teaching of game design. It's huge that our students will have the opportunity to learn directly from her."