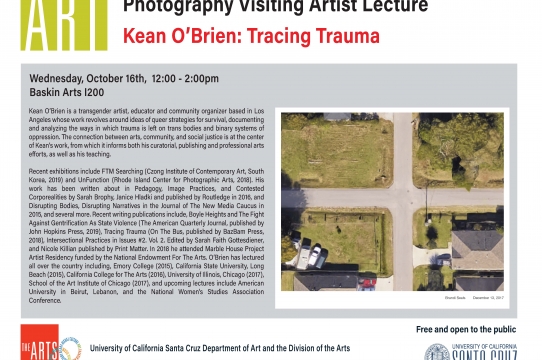 Lecture Title: Tracing Trauma Through The Landscape of Trans Bodies 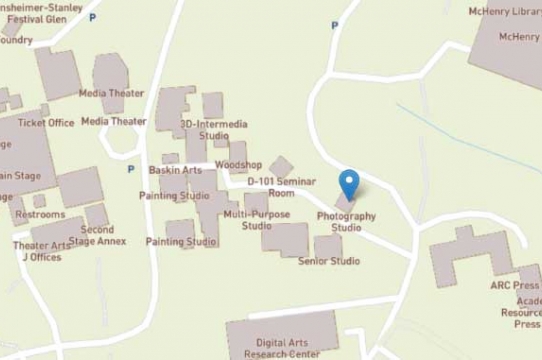 Kean O’Brien is a transgender artist, educator and community organizer based in Los Angeles whose work revolves around ideas of queer strategies for survival, documenting and analyzing the ways in which trauma is left on trans bodies and binary systems of oppression. The connection between arts, community, and social justice is at the center of Kean’s work, from which it informs both his curatorial, publishing and professional arts efforts, as well as his teaching.

Recent exhibitions include FTM Searching (Czong Institute of Contemporary Art, South Korea, 2019) and UnFunction (Rhode Island Center for Photographic Arts, 2018). His work has been written about in Pedagogy, Image Practices, and Contested Corporealities by Sarah Brophy, Janice Hladki and published by Routledge in 2016, and Disrupting Bodies, Disrupting Narratives in the Journal of The New Media Caucus in 2015, and several more. Recent writing publications include, Boyle Heights and The Fight Against Gentrification As State Violence (The American Quarterly Journal, published by John Hopkins Press, 2019), Tracing Trauma (On The Bus, published by BazBam Press, 2018), Intersectional Practices in Issues #2. Vol. 2. Edited by Sarah Faith Gottesdiener,  and Nicole Killian published by Print Matter. In 2018 he attended Marble House Project Artist Residency funded by the National Endowment For The Arts. O’Brien has lectured all over the country including, Emory College (2015), California State University, Long Beach (2015), California College for The Arts (2016), University of Illinois, Chicago (2017), School of the Art Institute of Chicago (2017), and upcoming lectures include American University in Beirut, Lebanon, and the National Women’s Studies Association Conference.

My lecture will be based off a text that I published this year (https://art.ucsc.edu/sites/default/files/On-The-Bus-Text_Tracing-Trauma.pdf). I will discuss my two projects, Mapping A Genocide and Tracing Trauma. As well as Zackary Drucker's new work and Oli Rodriguez's Papi Project.

I will transition into the Q&A with questions for the audience around discussing present moment collective traumas we are all experiencing and ways that we can see these traumas as separate and also collective. The goal being to move my analysis of collective and individual trauma of trans lives to the present space- and hopefully that will open up the dialogue for questions.