The Porter Sesnon Gallery at UCSC is proud to present: Goodbye Gauley Mountain 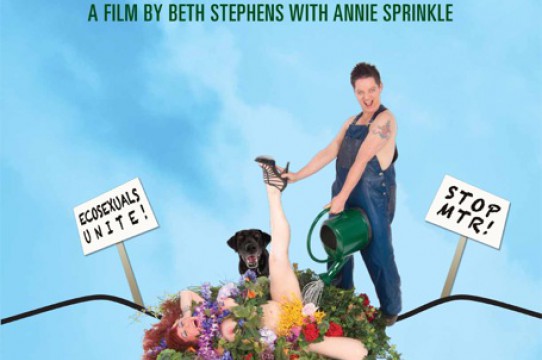 The Porter Sesnon Gallery at UCSC is proud to present:

Elizabeth Stephens: “Our film is about the controversy of mountaintop removal (MTR) mining, and it is also a love story about the Appalachian Mountains and the people who live in them. There are many films about MTR but none quite like ours.” Stephens’ family has worked in mining since the 1600’s beginning in Cornwall, England. Born in Montgomery, West Virginia, she says she was raised to marry into the coal business. Instead she moved to California, became an artist and professor at University of California, Santa Cruz, and married Annie Sprinkle, an artist and a feminist adult film star with a PhD in human sexuality. They have been life partners and collaborators for twelve years.

Here's what the critics say:

“Heartfelt, haunting and downright provocative, ”Goodbye Gauley Mountain” is one of the most captivating environmental documentaries of the year.”  —Greg Archer, Huffington Post

“This is, without compare, the sexiest nature documentary and one of the most profound films to deal with the beauty and tragedy of the Appalachian Mountains in the age of King Coal.” —Russ McSpadden, Earth First! Journal

“I was expecting to see a boring, hippie, lesbian, environmentalist film but Goodbye Gauley Mountain: an Ecosexual Love Story is unlike any film I’ve ever seen before.   It’s fun, it’s dirty and after watching this film, you’ll never think of tree hugging or where your electricity comes from in quite the same way.”—Travis Mathews, Interior.LeatherBar

This event is free and open to the public. The Sesnon Gallery is located above the koi pond at Porter College. Metered parking is available in the Porter lot or parking passes available upon request for community members. (831) 459-3606.