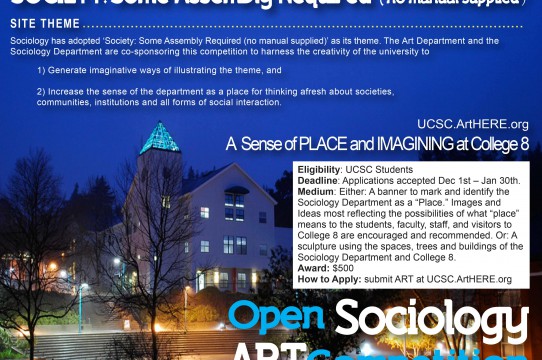 Please see flyer for additional information on submitting your proposal.

Campus Placemaking – a new precedent for engagement and storytelling through placeBy Lauren on December 3, 2012

College campuses are one of the few places where people, for at least one point in many of our lives as students, staff or faculties, frequent and come to know intimately. Images of stairwells, quads, and hallways are mapped into our brains’ geography, forever navigating us through our memories on campus.

Yet, if you stop to think about college campuses, many have been designed with large formidable structures in mind, planning for flow of bodies to and from destinations, like cars on the streets of a city. Quads and cafeterias were built specifically for the purpose of congregating and exchange, but the rest of campuses often are left wanting for more integrated use of space as we see in cities as of late. These new updated physical urban spaces are functional, aesthetically pleasing, engaging and inviting, all at the same time.

Project for Public Spaces noted, “Campus planning has sometimes been neglectful of allowing for and creating such places, instead focusing more narrowly on single-use facilities and isolated design statements.” Much of the planning and architectural design of college campuses, particularly from mid to later 20th century, have been renovated in more recent years with the surge in appreciation for aesthetic and function. “This isn’t just nostalgia, but a hardnosed sense of the real value, even marketability, of tradition, and, of course, beauty,” explained Gretchen Buggeln, Associate Professor of Art History and Humanities at Valparaiso University. “This is particularly important because studies suggest that the primary factor influencing the choice of college is most often the physical campus.”

“Creative placemaking isn’t just for cities,” explained ArtPlace America’s Director, Carol Coletta. Campuses have enormous potential to experiment with and establish a precedent for the use of place and engagement. To begin, many have been developed at a walkable scale, the foundation of a vibrant place. Furthermore, students, with their collective wealth of ideas, energy, and creativity, are an untapped asset in the use and design of the campus. Buggeln references Perry Chapman, a principal planner with Sasaki Associates, naming sustainability, community, and regional authenticity as the critical issues for future campus building. Though the campus community – including its students – is the lifeblood of these campuses, both financially and socially, it has traditionally had very little opportunity to impact on the physical embodiment of the institutions they make up. Until now.

ArtHERE has partnered with the University of California at Santa Cruz to engage students in creating a sense of place at their schools on campus. The Art Department and the Sociology Department are co-sponsoring a competition to harness the creativity of the university to generate imaginary ways of illustrating the theme, “Society: Some Assembly Required (no manual included),” and to increase the sense of the department as a place for thinking afresh about societies, communities, institutions and all forms of social interaction.

Campuses that embark on this exploration of community and authenticity of the story it tells through engagement and physical places will emerge as leaders in institutions that have long been looked to for forward thought and new precedents. ArtHERE is excited to be on this journey with University of California Santa Cruz. Stay tuned for updates in the progress of our initiative with UCSC.