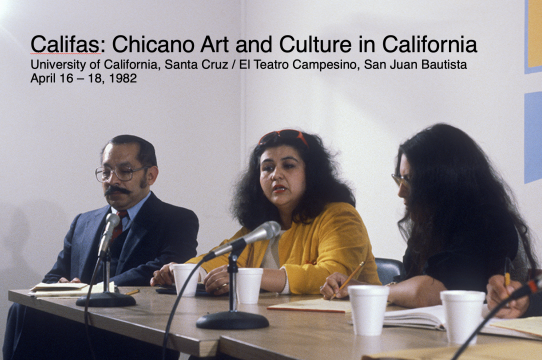 In 1982, UC Santa Cruz Art Professor Eduardo Carrillo conceived of the “Califas: Chicano Art and Culture in California” conference to bring together artists, scholars, and creative social instigators to take stock of La Raza y El Movimiendo after several decades of political awakening and action. Together with Philip Brookman, Tomás Ybarra-Frausto, and Juventino Esparza, he assembled a remarkable group for a multi-day symposium at UC Santa Cruz. They argued and agreed that the Chicano movement in all its variety and manifestations was very much alive and needed continued nurturance.

Below are segments of interviews by Philip Brookman of Juventino Esparza and Eduardo Carrillo along with recordings of José Montoya, Amalia Mesa-Bains, and Judy Baca from the 1982 conference.

Eduardo Carrilo speaks about the importance and motivation to conceive the Califas Conference to address a lack in education and recognition of Chicano art and culture.

Amalia Mesa-Bains sharing her thoughts during the 1982 Califas Conference about the origins and development of the Chicano art movement by looking back at culture and identity.

Amalia Mesa-Bains speaks about the Chicano movement in context of the university.

José Montoya speaks about Chicano artists returning to their communities and their relationship to institutions.

The full archival footage of the 1982 Califas Conference and Juventino Esparza/Eduardo Carrillo interview are available to the public by the Department of Special Collections at the University of California Santa Barbara.
Visit CaliSphere for full context and archived interviews of the Califas Conference.