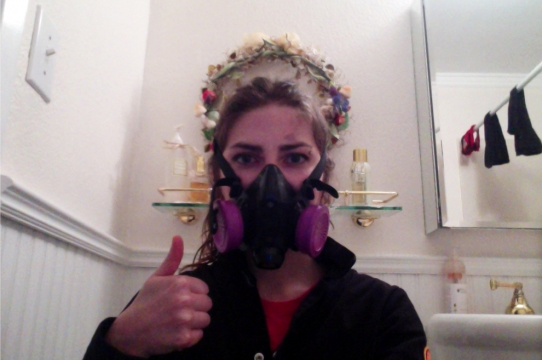 Anastasia Oleson has been living, working, and studying art in Santa Cruz for the last decade. Her relationship with art has been a turbulent one, only deciding to major in art after a long period of grieving. Her greatest inspiration comes from what is hidden in each of us and the world around us. “Stop hiding from me!” she says. She works toward inner peace, primarily focusing on drawing, watercolor, costumes, music, and bronze. She does not create art so much because she likes to, but more because she is compelled to. 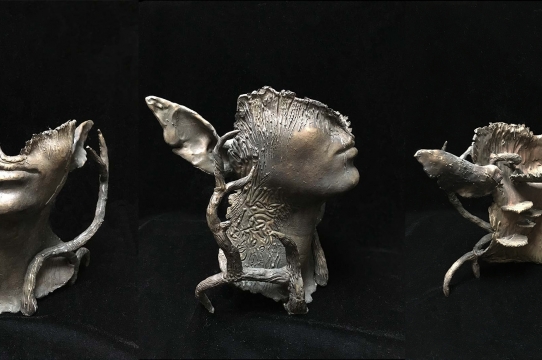 My art looks at the many natures of humanity that link us all together: how we relate to food, dreams, magic, time, music, language, fear, and ritual. I try to translate what I feel when I hear a stranger’s laughter, when I see loved ones embrace, when I smell something dead cut the air in a forest. I explore what it means to love and be loved through the lens of death. It’s by witnessing and translating the physical and emotional spaces of our natures that I feel connected with others and with the universe. I work to strip experiences down to their core and reweave them in my minds image. In doing this I hope to create something tangible that resonates within people’s minds, bodies, and souls. 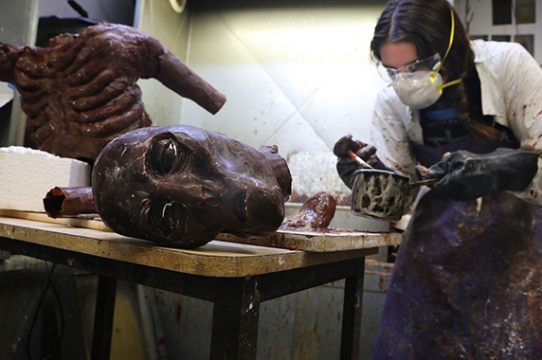 At the start of quarantine, there were a series of events and coincidences which lead to connections which lead to the grotesque figure you see before you. Specifically, I started bagpipe lessons, found an old book under my bookcase entitled The Art of Breathing: Thirty Simple Exercises for Improving Your Performance and Well being, by Nancy Zi, I started binge watching Avatar the Last Airbender, and my mom, whom I live with, got sick. Even at the time I was taken aback by all these happenings; here the universe dumped a whole boat-load of breath related activities on me during a pandemic of an illness that attacks one's entire respiratory system. My mom, who was quarantined in her room for an entire month, didn’t have COVID 19, but it was a scary time all the same. While she was “room-ridden”, we both did our own breathing exercises, hers were designed for people with COVID to improve oxygen intake, mine were from my book, also designed to improve oxygenation, but with the added bonus of meditation instructions. When I got to the final season of Avatar, in which we learn the most about fire bending, I was reminded just how important the breath is for fire benders- it’s where they get all of their power and strength from. 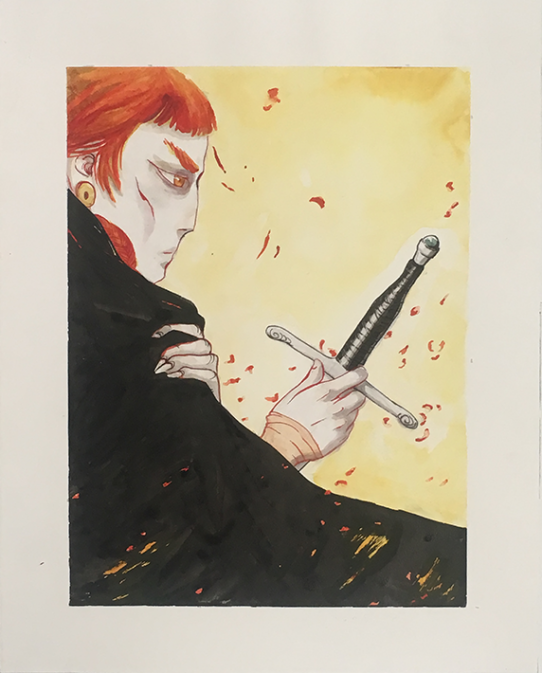 Avatar was created by two dudes who practice martial arts, so it’s no surprise there is a lot of lore about breath in the series. But I consider myself a fire bender, like some people might consider themselves belonging to Gryffindor from Harry Potter, and I had forgotten my ways, yes indeedy. I’m a fan of etymology, and one thing I think about a lot is the root of the word “anger”. It’s an old proto-indo-european root “angh” meaning “tight, painfully constricted, painful”. It’s no coincidence that when we are angry, we tend to hold our breath in. It’s when we take some time to calm down and open up our chests that we can begin to recover from angering situations. I know I’m not the only Irwin Scholar this year who was totally thrown through a loop. So much of what could have been ended with the pandemic, and for a long time I was deeply angry. While we had a lot to be grateful for, we still went through some serious grieving for our art and our lives. As I meditated on my breath, and on breath as a concept, what I envisioned for my Irwin project was narrowed down to a character I created for my comic The Porcelain Witch. His name is Péil (or Féil, pronounced like “pale”), and he is a prince who was sacrificed and became an air spirit. so he was most likely a sacrifice.

Péils main inspiration comes from an interesting source. Several years ago I witnessed a story on what I’m certain was a bog body. A bog body is someone who has been mummified in a peat bog. Typically, their skin sturns a blackish red while their hair becomes a copper from the tannins in the bog. The lack of oxygen, cold temperature, and low pH in bogs preserves the dead remarkably well. The body I remember was a man, with a mostly intact body. He was a nice specimen, but there was something really special about him: he was filled, from esophagus to anus, with the pits of small stone fruits, similar to sour cherries of our time. For the amount of fruit that was inside of him he would have had to have been eating them for days, so he was most likely a sacrifice. 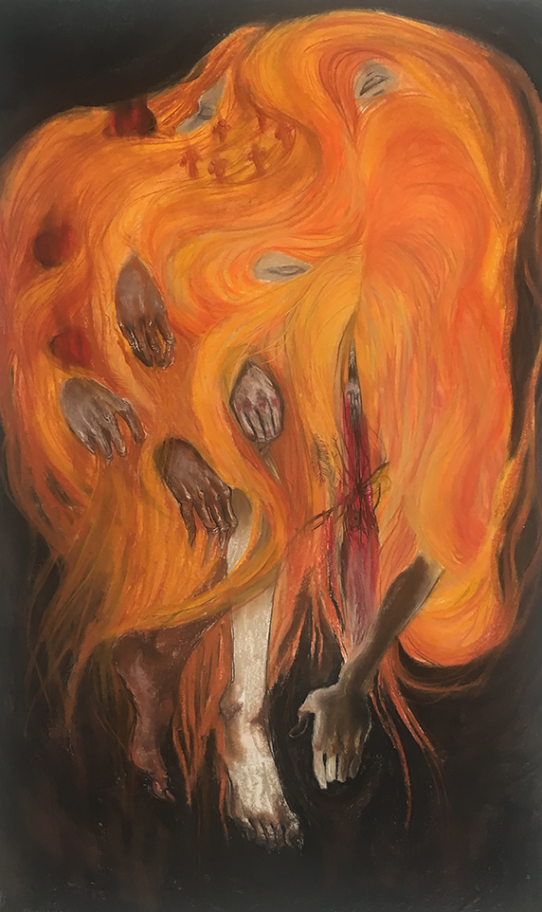 When we first meet Péil, he has just regained some freedom from imprisonment in the ground. His lungs are still filled with earth and the stone fruits he was forced to eat during the last few days of his life. Initially, he seems vengeful, in no small part due to the sword he wields. The sword, however, isn’t used as a weapon, but as a means of escape. In tarot, and other realms of esoterica, there are four earthly elements, each with symbolic representations. Coins for earth, cups for water, wands for fire, and swords for air. This was really confusing to me when I was younger, swords are so substantial, why wouldn’t air be represented by the wand? Some will tell you that the sword is a tool of communication, which sometimes hurts (ouchie). I feel it more viscerally. The sword symbolizes severance, release, and freedom. It’s the tool that’s going to bring about the most change in your life. When we employ the sword, we are cutting ourselves loose from dangerous situations, toxic relationships, bad habits, addictions. Even in tarot, swords have a bad rep. Swords seek freedom and truth, and the pain that comes with them is real. Many people who have read my tarot wince when they flip a sword card, but where there are swords, there is light at the end of the tunnel. Not everyone gets to have a sword, not everyone has the freedom to make choices for themselves, and not everyone can change their situations. Péil uses his sword as a tool to uplift himself and he’s changing his situation perhaps in the only way he can. If we have the ability, we can’t let ourselves get bogged down in what could have been, we have to move on to what can be, and focus on what is and focus on each other. 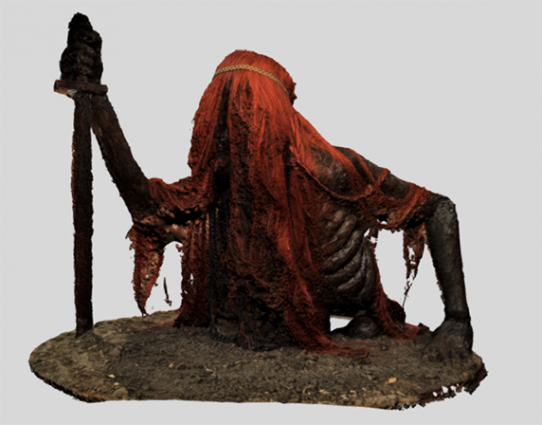 So why The Butterfly? As I was working, I was listening to a playlist I made for this project. Recently, as I mentioned above, I started taking bagpipe lessons. I love the way bagpipes sound, and similarly to drums I’m often moved to tears when they are played soulfully and powerfully. So, recently celtic music has been on my brain, and while working, the slip-jig “The Butterfly” came on. “The Butterfly”, many celtic music experts and enthusiasts will tell you, is a weird tune. It’s not typical of a slip-jig in that it’s played slower and it’s melody is quite haunting. When you listen to it it’s nigh but impossible to imagine a butterfly flitting through your vision. Butterflies are symbolic of transformation and are air spirits, like Péil is to me, but it’s their movement I’m stuck on. They aren’t graceful creatures; they’re actually quite chaotic when they fly. Whereas birds can soar and bees can hover, butterflies look like they’re constantly fighting gravity. This is evident in the rhythms of the jig. When I designed this version of Péil, I wanted to show defiance and struggle. He was sacrificed, brought back, sacrificed again, then buried by his people, but he is still fighting to make things right. His chest cavity is weighted down now, but with his sword he will eventually right himself and release what haunts the present. 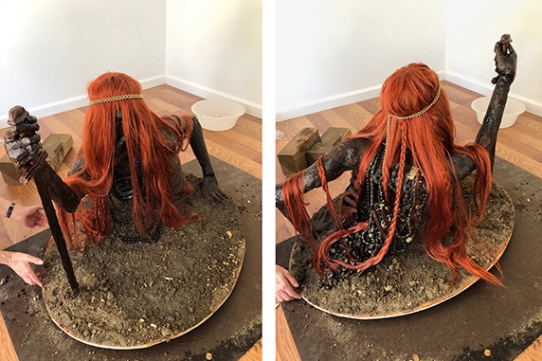