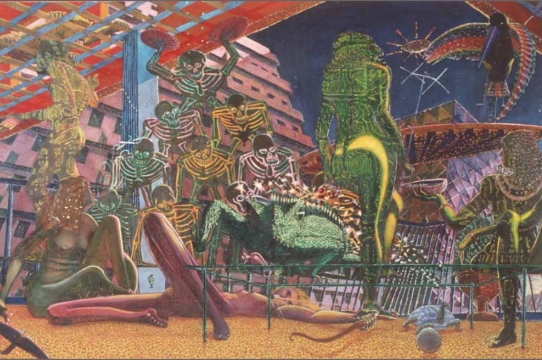 The Sesnon Gallery exhibition Eduardo Carrillo: Comunidad de Califas anthologizes the life-work of the titular artist through his personal manifestations of “Califas”– in identity, spirituality, and community. Califas is a branch of the Chicanx movement that centers Californian Latinx culture and struggle in its educational mission. In the current age, we seek a type of beauty that reflects our neighbors and our towns. We seek strength in togetherness, a notion that Eduardo Carrillo emulated in his art and during the conception of Califas. What can ancestry and tradition teach us about resilience in the face of oppression?

Eduardo Carrillo's legacy is told by those who knew him in friendship, scholarship, and allyship. The reception will feature a tour of the virtual exhibition hub, website, and a panel discussion with Amalia Mesa- Bains, Philip Brookman, and others with introductions by Shelby Graham, Sesnon Gallery Director.
This exhibition is sponsored by Museo de Eduardo Carrillo and the Arts Division at UC Santa Cruz.

Amalia Mesa-Bains is an artist and cultural critic who has worked to define a Chicano and Latino aesthetic in the United States and in Latin America.
Her artworks, primarily interpretations of traditional Chicano altars, resonate both in contemporary formal terms and in their ties to her Chicano community and history.  As an author of scholarly articles and a nationally known lecturer on Latino art, Mesa-Bains has enhanced the understanding of multiculturalism and reflected major cultural and demographic shifts in the United States.  She has pioneered the documentation and interpretation of long-neglected Chicano traditions in Mexican-American art, both through her cultural activism and through her own altar installations.

Philip Brookman has been a consulting curator with the National Gallery of Art since 2014, where he organized the critically acclaimed work of photographer Gordon Parks. Brookman is also a photographer, filmmaker, and writer who has worked extensively on issues of modern and contemporary art. He has organized and collaborated on major exhibitions for other museums including the Tate Modern, London, the National Gallery of Art, Washington, and The Museum of Fine Arts, Houston. He was previously Senior Curator of Photography and Media Arts at the Corcoran, and has held curatorial positions at Washington Project for the Arts, El Centro Cultural de la Raza, San Diego, and the University of California, Santa Cruz.

Irene Juárez O'Connell is a community-based artist inspired by the Mexican muralist tradition and the Chicano movement of the 1960s in LA. A graduate of University of California Santa Cruz in Public Art; Latin American and Latino Studies, she is passionate about uplifting marginalized voices through public art, mentorship, and organizing roles. She also serves on the board of the Santa Cruz Museum of Art and History.

Victor Cervantes is a prolific artist, visual arts consultant, and college instructor. He is an accomplished academic whose graduate research at Columbia and Harvard focused on promoting cultural diversity through art. Cervantes also serves as the Art Director of the non-profit Quinto Sol, which works with youth to empower neighborhoods through artistic expression.