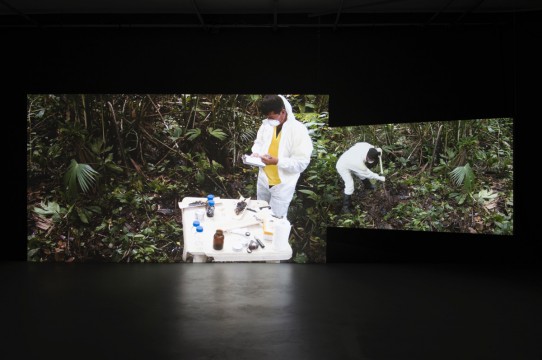 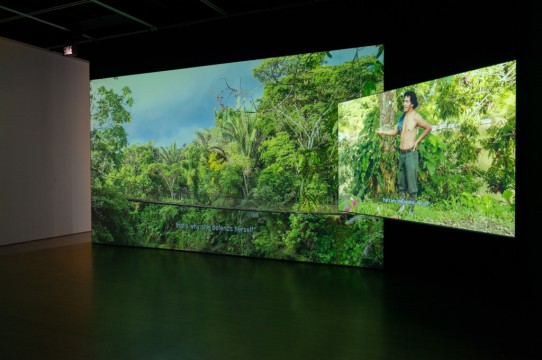 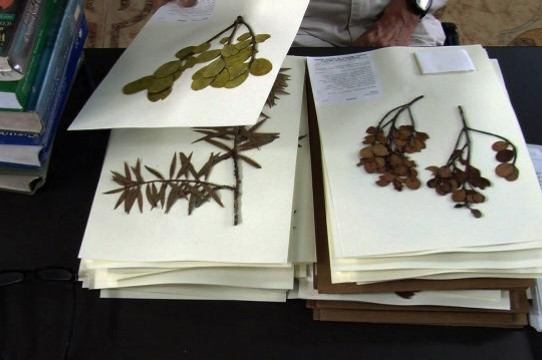 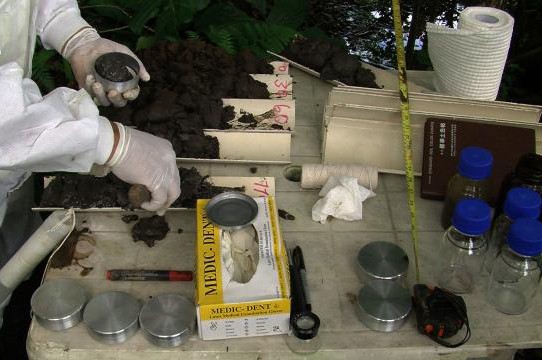 Forest Law, 2014, is a 38-minute video essay and book drawn from research carried out by Biemann and Tavares in the Ecuadorian Amazon. It considers the legal cases which plead for the rights of nature against the dramatic expansion of large-scale extraction activities in the region, including the trial won by the indigenous people of Sarayuku based on their cosmology of the living forest. The project creatively maps the historical, political, and ecological dimensions of these trials on behalf of the forest and the people who cultivate the forest, tracing the entanglements and frictions between the ethical and epistemic stakes these cases raise.

Situated at the transition between the Amazon floodplains and the Andean mountains, the Ecuadorian Amazon is one of the most biodiverse regions on Earth and fulfills vital functions in global climate regulation. It is also the home of indigenous nations and a land of great ethno-cultural diversity. Underlying this vast territory are immense deposits of oil, gas, and minerals. This makes it the target of many corporate extractive industries, intent on unearthing the mineral wealth despite the diasterous effects these industries have on the area and its inhabitants. In 2008, indigenous lawyers and experts successfully fought to amend the constitution of the State of Ecuador, establishing fundamental rights of nature for eco-systems to fight this extraction. Nature in Ecuador became a subject of the national legal code, with the governments and corporations abusing and misappropriating it, at least conceiveably, to be held accountable.

For Forest Law, Biemann and Tavares researched a series of landmark legal trials in the Inter-American Court of Human Rights, in which claims were made for the rights of nature in the face of human destruction occurring on the sovereign land of indigenous nations in the Amazon. Through a re-telling of these cases, Forest Law brings together the legal, ecological, cosmological and scientific dimensions in the battles against climate change.

An artist, researcher and video essayist based in Zurich. Biemann’s work explores the uneven resource distribution, climate change and ecologies of oil and water as principles of planetary organization of power.

An architect and urbanist whose work deals with the visual and spatial politics of territorial conflicts and climate change in the Amazon and other frontiers across the third world. Tavares is based in Quito, Equador.

A professor in the department of the History of Art and Visual Culture at UC Santa Cruz and founder and director of its Center for Creative Ecologies. He writes widely on the intersection of contemporary art, global politics, and ecology and is the author of numerous books, including Decolonizing Nature: Contemporary Art and Political Ecology (Sternberg Press, 2016), Against the Anthropocene: Visual Culture and Environment Today, (Sternberg Press, 2017), and The Migrant Image: The Art and Politics of Documentary During Global Crisis (Duke University Press, 2013)—winner of the College Art Association’s 2014 Frank Jewett Mather Award.

This exhibition is sponsored by the Institute of the Arts and Sciences and the Center for Creative Ecologies at UC Santa Cruz.