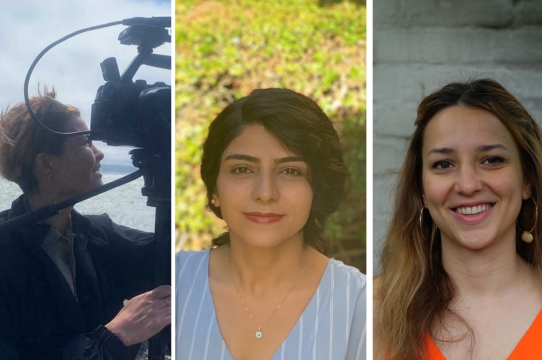 Join us for a conversation on diaristic storytelling and narrative technique with SocDoc filmmakers Hoda Sobhani, Chisato Hughes, and Oana Tenter.

October 4-15, 2022
Futility Season (2021) is an attempt to revive a friendship that has faded away due to circumstances that imprisoned one and forced the other to emigrate. Neda, who lives in Iran, spent her thirtieth birthday in prison, and Hoda, the film director, began her thirties in a new country as an immigrant. Runtime 23m. Directed by Hoda Sobhani.

November 1-12, 2022
Many Moons (2020) is a hybrid documentary that asks questions about ghosts and placemaking today– looking at the history of Chinese expulsions in Humboldt County and the people who, often with the help of local tribes, continued to live in the county despite the threat of white violence. Directed by Chisato Hughes.

January 3-14, 2023
Yesterday Ended Last Night
In the Arizona desert, a community of Christian Romanians live in the fear that the socialism they left behind the Iron Curtain is making a comeback in their new home, America. Two women filmmakers travel the literal and emotional distance to understand how their fellow Romanians have turned far-right Americans. Threading a fine line between being accepted and rejected by the church members, the filmmakers process the ethics of their methodologies and ponder upon the purpose of their documentation. The project takes a close look at the intersection of politics and religion in the lives of a Romanian-American conservative Christian community in Arizona and weaves a multigenerational portrait of its members. Directed by Oana Tenter and Delia Marinescu.

Before coming to Santa Cruz, Chisato Hughes was an organizer with California Coalition for Women Prisoners, and HAPI, Humboldt Asians and Pacific Islanders in Solidarity. They believe in documentary as a site for empathy, a means for reckoning social histories and subjective relationships, and for bearing witness.

Oana Tenter is a documentary filmmaker currently finishing her MFA in Social Documentation at University of California Santa Cruz. Oana’s documentary short THE PASTOR’S WOMEN, about a Pentecostal Roma community set in her home country Romania, premiered at Open City Docs London in 2019. Her work includes collaborations with The Roundhouse, The Young Vic Theatre, The Tab London, VIY and she has worked for the Oscar award-winning production company On the Corner. Her writing can be found in The Guardian, The Evening Standard, Internazionale, Scena9, and Dispatch, among others. She is the recipient of a 2020-2022 Fulbright scholarship.