Glenn Ligon: From the Collections of Jordan D. Schnitzer and His Family Foundation 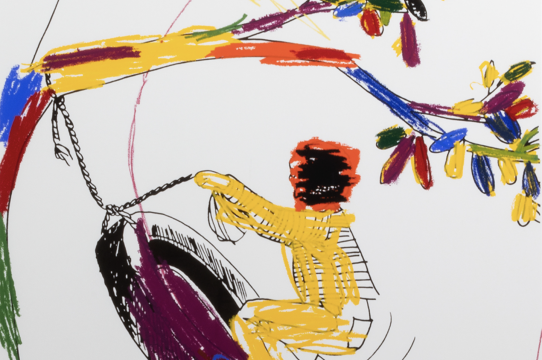 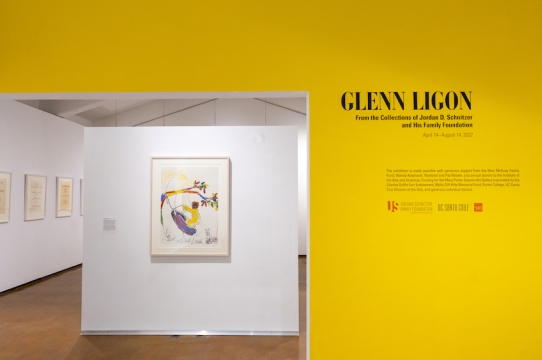 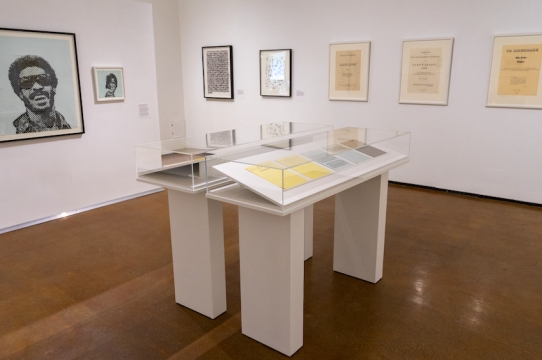 Glenn Ligon: From the Collections of Jordan D. Schnitzer and His Family Foundation brings together works on paper by the influential artist, which explore how constructions of Blackness in the United States infuse popular culture, literature, and history. Featuring the series “Narratives,” 1993, Self Portrait at Nine Years Old (James Brown), 2008, and End of Year Reports, 2003, among other artworks, the exhibition provides insights into Ligon’s long-running aesthetic interrogations into his personal social positioning and experiences as a queer, Black man. The structures and histories that make these shared identity categories are also made subject in the artist's critical examination. The artworks engage the entangled histories of race, literature, and culture, with a broad range of references from slave narratives to children’s coloring books. Together, they poignantly articulate the role of language and popular culture in the structuring of the self—and society—in both the past and present.

Glenn Ligon: From the Collections of Jordan D. Schnitzer and His Family Foundation is organized for the UC Santa Cruz Institute of the Arts and Sciences.

The exhibition is made possible with generous support from the Nion McEvoy Family Fund, Wanda Kownacki, Rowland and Pat Rebele, and annual donors to the Institute of the Arts and Sciences. Funding for the Mary Porter Sesnon Art Gallery is provided by the Charles Griffin Farr Endowment, Molly Cliff Hilts Memorial Fund, Porter College, UC Santa Cruz Division of the Arts, and generous individual donors.

About the Artist:
Glenn Ligon (b. 1960) is best known for his landmark text-based paintings, made since the late 1980s, which draw on the influential writings and speech of 20th-century cultural figures including James Baldwin, Zora Neale Hurston, Jean Genet, and Richard Pryor. In 2011 the Whitney Museum of American Art held a mid-career retrospective of Ligon’s work, Glenn Ligon: America, organized by Scott Rothkopf, that traveled nationally. Important recent shows include: Grief and Grievance (2021), at the New Museum, where Ligon acted as a curatorial advisor; Des Parisiens Noirs at the Musées d'Orsay, Paris (2019); and Blue Black (2017), an exhibition Ligon curated at the Pulitzer Arts Foundation in St. Louis, among others. Ligon has been the subject of solo museum exhibitions at the Camden Arts Centre in London, the Power Plant in Toronto, the Walker Art Center in Minneapolis, and the Studio Museum in Harlem, among others. His work has been included in major international exhibitions, including the Venice Biennale (2015 and 1997), Berlin Biennal (2014), Istanbul Biennal (2011, 2019), Documenta XI (2002), and Gwangju Biennale (2000). Ligon’s work is held in the permanent collections of museums worldwide including Tate Modern, London; Centre Pompidou, Paris; Museum of Modern Art, New York; San Francisco Museum of Modern Art; and the Los Angeles County Museum of Art. His awards and honors include a John Simon Guggenheim Memorial Foundation Fellowship and the Studio Museum’s Joyce Alexander Wein Artist Prize. Most recently, Ligon was elected as a member of the American Academy of Arts and Letters. 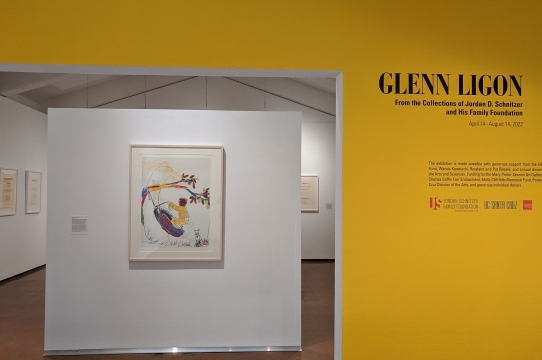 We invite you also to Strange Weather: From the Collections of Jordan D. Schnitzer and His Family Foundation, on view at the Santa Cruz Museum of Art & History, April 14–August 14, 2022.

Jordan Schnitzer Family Foundation in Portland, Oregon was established in 1997. Since the program’s inception, the Foundation has organized over 110 exhibitions and has art exhibited at over 160 museums.