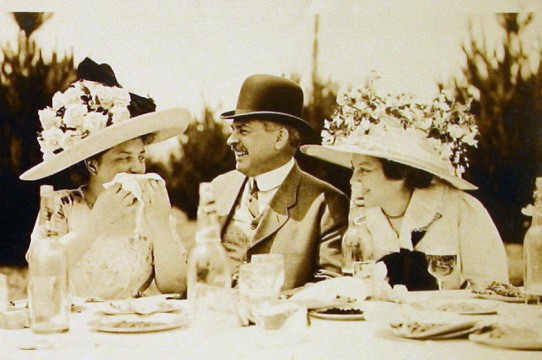 Who was Mary Porter Sesnon?
click here for full story

Born in Soquel in 1868 to Benjamin F. Porter and Kate Hubbard, Mary Sophia Porter was the sole survivor of three children. She spent her childhood in Soquel, CA, before moving to Los Angeles and San Francisco. As a young woman, she traveled to Europe with her family and was tutored in music, arts appreciation and civics. In 1890, her father built her a studio on the property, a place of solace for her throughout her life. She witnessed a changing California landscape in the late 1800s and married William T. Sesnon in 1896. Together they returned to her childhood property, where they built their summer home, Pino Alto, and hosted cultural salons from 1911 to 1927. Pino Alto, named after a tall pine tree near the driveway, is now called the Sesnon House and serves as headquarters for the culinary arts program and restaurant for Cabrillo College in Aptos.

The exhibition contains many sketches and watercolors from an historic scrapbook made during these salons, calligraphy by Ms. Sesnon, along with paintings by California artists Will Sparks, Ferdinand Burgdorff, Haig Patigian, Frank Unger, Charles Dickman, Margaret Rogers, Leonora N. Penniman, and Cor de Gavere. The work of Ms. Sesnon’s great-granddaughter, Molly Porter Cliff Hilts (Porter College ’81), and other Sesnon family members is included in the exhibition. The exhibition places Ms. Sesnon at the center of it all,  organizing creative salon-type parties that helped break down social and intellectual barriers and brought a variety of people together in new ways. These salons were gatherings that lasted for days. Guests included thespians, musicians, and dignitaries.

California historian and writer Geoffrey Dunn, who is contributing a catalog essay states, “While the family names Porter and Sesnon are sprinkled throughout Santa Cruz County and are familiar to anyone who has lived here for any length of time, their significant impact on regional history has been somewhat overlooked. In particular, Mary Porter Sesnon’s contribution to the local art scene at the end of the 19th and well into the early 20th century has remained virtually unknown. This exhibition richly and lovingly helps to fill that void.”

Curator Shelby Graham mentions,“This narrative has been brewing in my mind for the past twenty years as director of the Sesnon Gallery. Students at UC Santa Cruz are eager to hear this tale of bringing friends together to share art, stories, food and ideas that question the political climate of the time.” To further reflect this, the gallery will host weekly salons for performance and discussion. Guests will be provided with paper and art supplies to create a scrapbook capturing the thoughts and images of today’s political and cultural landscape, much in the same way as Mary Sesnon’s scrapbook did.

In tandem with this historical display, and enriching the sense of family tradition, Molly Cliff Hilts’ recent encaustic paintings and larger-than-life drawings will be featured in the adjacent Porter Faculty Gallery. Concurrently showing in the Sesnon Underground Gallery is for the breath of a poem, an installation by alumna Diane Jacobs (Porter ‘88). This work is an homage to the late teacher and poet, Kathleen Flowers.

Check out our community press coverage:

more on the history of the salons at Pino Alto

In the vintage scrapbook we found signatures of such dignitaries as Herbert Hoover and his wife, Lee Henry Hoover; John McLaren, the landscape architect for Golden Gate Park and for the grounds at Pino Alto; and of foreign dignitaries visiting during San Francisco's 1915 Panama-Pacific International Exposition. Mary Porter Sesnon was on the women's committee for the exposition, and William T. Sesnon was instrumental in arranging for a number of foreign dignitaries to attend.

In 2018 this exhibition at UCSC’s Sesnon Art Gallery celebrated  the life of Mary Porter Sesnon and her influences on the arts in Santa Cruz County.  Mary Porter Sesnon's sketches and water colors from her historic scrapbook were on display, along with paintings by great-granddaughter Molly Porter Cliff Hilts (Porter College ’81) and the work of other family members. Prominent California historian Sandy Lydon, professor emeritus of History at Cabrillo College, will be contributing an essay on the history of Mary Porter Sesnon.  The gallery will also host a series of salons during the 4-week exhibition including events at the historic Sesnon House (Pino Alto) in Aptos.

Mary Porter and William T. Sesnon's salons, held at Pino Alto (Sesnon House) from 1911 to 1926, were extravagant gatherings that lasted for days. The guests included patrons and artists as well as thespians, who sometimes performed on the stage off the grand living room. Original music scores, poetry, and prose from the scrapbook will be on display. The guests were given pages on which they could draw or paint, write poetry or limericks.

In the scrapbook we found signatures of such dignitaries as Herbert Hoover and his wife, Lee Henry Hoover; John McLaren, the landscape architect for Golden Gate Park and for the grounds at Pino Alto; and of foreign dignitaries visiting during San Francisco's 1915 Panama-Pacific International Exposition. Mary Porter Sesnon was on the women's committee for the exposition, and William T. Sesnon was instrumental in arranging for a number of foreign dignitaries to attend.

Porter College is named in honor of the grandfather of three University of California benefactors: Porter Sesnon, Barbara Sesnon Cartan and William T. Sesnon. Benjamin F. Porter and his cousin George moved to California from New Hampshire in the 1850’s, at the suggestion of another cousin, John Porter, who was a resident of Soquel in the 1840’s and later Sheriff of Santa Cruz County. The Porter cousins traveled by sea to Panama and walked the Isthmus to the Pacific Ocean before sailing up the coast to California.

After settling in Santa Cruz, Benjamin Porter purchased a small parcel of land containing a tannery in the area now known as Porter Gulch. By 1870, he had acquired more land and built a family home. That same year, he became founding director of County Bank of Santa Cruz. In 1896, Benjamin Porter’s only surviving child, Mary Sophia, married William T. Sesnon, a native of Alameda who later became Deputy Sheriff of the State of California.

The Porter-Sesnon family has always been a generous supporter of UC Santa Cruz and its mission. In 1968, a gift from Barbara Sesnon Cartan established the Mary Porter Sesnon Art Gallery, in memory of her mother. Other gifts have provided scholarships and grants for Porter undergraduates.

It was the extraordinary gift of nearly seventy acres of Porter-Sesnon land that created the endowment that the College now enjoys—in gratitude for which the College, which was founded in 1969 as College Five, was renamed Porter College on November 21, 1981.