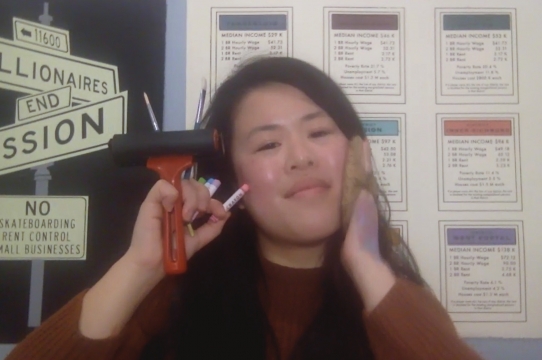 Jocelyn Lee is a printmaker interested in utilizing the malleability and multiplicity provided by printmaking for public-facing applications. She is graduating from UC Santa Cruz with a B.A. in Studio Art and a B.S. in Cognitive Science. Her cognitive science background informs an art practice that explores deviations from the norm of the senses that inform our perceptions and construction of the world around us. She was first introduced to printmaking at UC Santa Cruz and quickly fell in love with the unlimited possibilities offered by serigraphy, which has fueled a need to know and master more processes such as intaglio, lithography, and relief. Most recently her practice has searched for ways to integrate digital techniques with the highly analog processes of printmaking to interrogate, subvert, and reclaim a culturally established visual language. 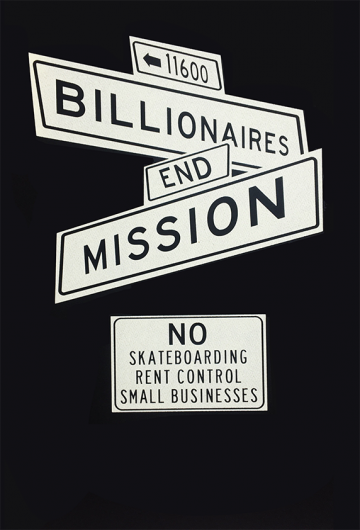 this piece was inspired by an article i read by the New York Times about how san francisco has the highest density of billionaires in any city in the world, and how a lot of these billionaires were new-money tech bros who happened to be in the right place at the right time when their companies went public. all these billionaires throw frivolously wealthy parties that have created a niche demand for elaborate ice sculptures, and it is an excessive wealth that leaves a pit of dread in my stomach and a lump in my throat as i watch the financial district at rush hour step over the houseless bodies laying in the streets of san francisco. i'd like to think that no matter how progressive and cool the yuppie gentrifiers think they are they're never brave enough for even a little public rebellion.

THE MAUSOLEUM OF ALL HOPE AND DESIRE by jocelyn lee

Somehow my work always finds its way towards san francisco– towards home.

what is home, who can afford home, how we can reconcile the loss of home?

I find my creative process to be a slow burn; conceptual ruminations that creep in the back of my mind until one day they erupt and there is epiphany and clarity and printmaking to be done. 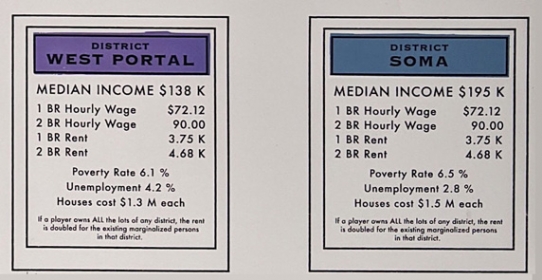 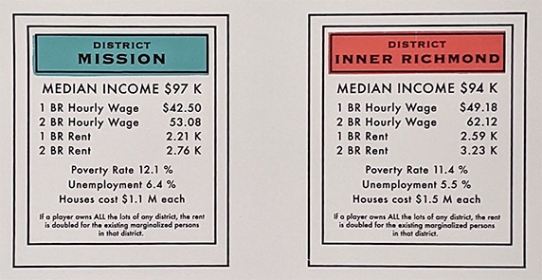 I was first introduced to printmaking at ucsc, and quickly fell in love with the multiplicity and manipulability offered by the process. ever since that first silkscreen class I have been manipulating and reiterating the muni transfer ticket design used as proof of fare payment for the bus that was used until 2017. the tickets are instantly iconic and nostalgia-inducing for any longtime resident of the city, which has inspired me to work with this self-invented idea of critical nostalgia. I've found it effective to take icons like the muni transfer or the monopoly title deeds in playground for the rich (2019) and subtly manipulate them so they are familiar, albeit subverted. nostalgia draws the viewer in, and further inspection reveals the imposter and a critique of the system it mimics. 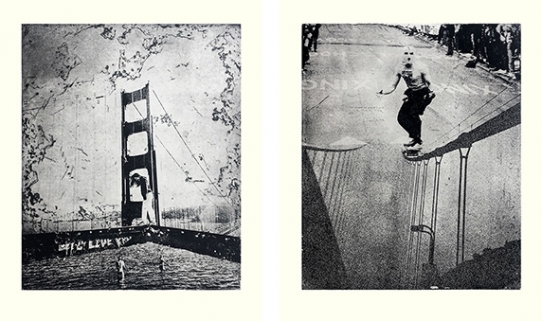 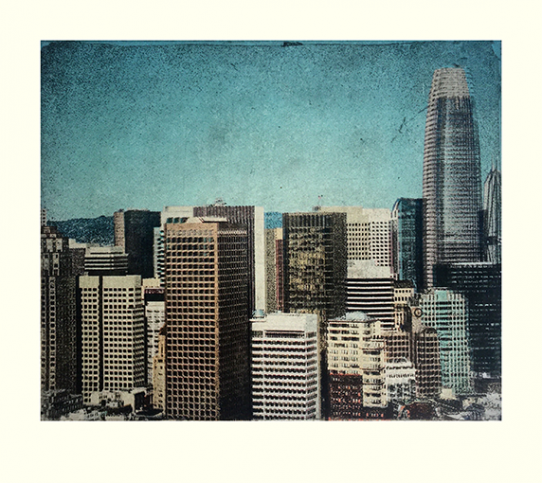 CARNAGE ENSUES AT DOLORES PARK (2020), earthquake! (be still my heart) (2020), TELL ME YOU’RE THE HEART OF THE GOLDEN WEST (2020) are part of a miniseries named playground for the kids (2020). in conversation with playground for the rich, this series is for the city kids who fear they won’t have the money or means to move out and start families of their own in one of the most expensive real estate markets in the world. I reconnected with old high school friends and asked for photographs of the places, people, and things they loved about San Francisco, and collaged them to make photo-based etchings on copper plates. it was amusing and heartwarming to see all the buildings, small businesses and scenery people love in this 7x7 mile city that feels so small yet so big, and ever changing. playground for the kids is the mausoleum of all hope and desire, a plea to the city of our youth to stay. 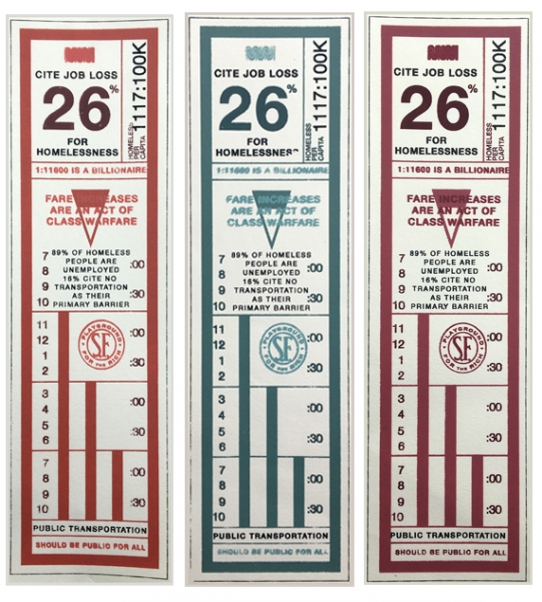 my first ever printmaking class was a silkscreen class at ucsc, and i immediately fell in love with the community and processes that drive printmaking. i especially love silkscreen printing for its precision, speed, customizability. and mass production capabilities. silkscreen printing is graphic, accessible, and diy in a punk sort of way. my silkscreen work tends to be graphic and interrogate text and language’s role in art. i work a lot with adobe illustrator and photoshop to make my silkscreen stencils, and it’s the perfect way for me to try to infiltrate and subvert an established visual language like these muni transfer tickets.

the modern muni transfer ticket is immediately nostalgia-inducing to longtime san francisco residents and was used from the 1980s until the end of their production in 2017. the tickets served as proof of payment for the city’s public transportation (real life print:”) digital image size: please enlarge so image is c”xd” on virtual wall no frame (left to right) orange, green, red and would change numerically daily and color monthly. it was in a public art course with dee hibbert-jones that i was truly pushed to consider the manipulations i made to the content and text of the tickets.

what was my message, how was i going to deliver that message, and how would that delivery serve my intent? i screenprinted these on newsprint and dreamed of wheatpasting them in the financial district of san francisco, where people might see them while rushing to catch a bus home via the very system this ticket came from. i wish these tickets were still used in the city today and wonder how they would infiltrate and circulate. residents of the city were very upset when muni decided to stop using them and switched to a different form of receipt, but were previously discarding these transfers whenever and wherever they wanted to in the street. when does trash become treasure? 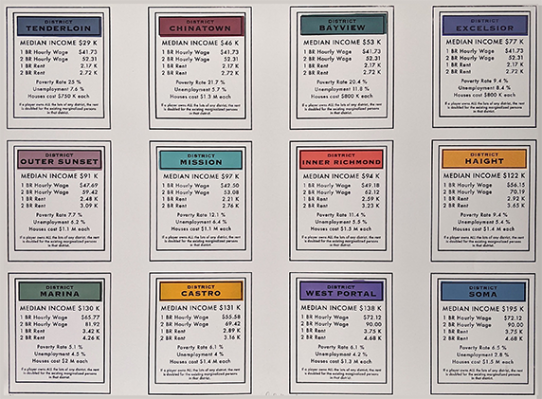 working within this self-invented idea of critical nostalgia, this piece is a play on the iconic monopoly property card and substitutes data collected about housing costs in just some of the many districts of san francisco. future reiterations are planned to track the cost of housing in the city, and i hope this piece may serve as both a teaching tool and art object. there is no overt political statement made but a power in the conclusions drawn from comparisons. the numbers speak for themselves and they do not lie; housing in san francisco is unaffordable, a playground for the rich.