The Gail Project with Alan Christy and Leon Serafim 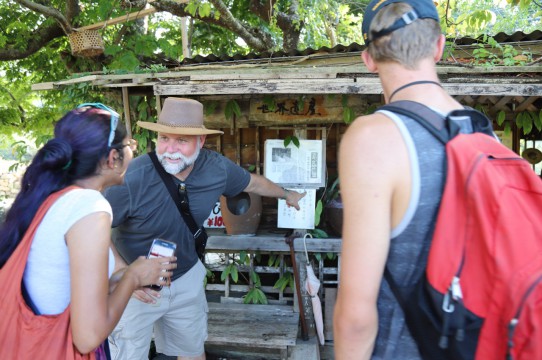 Join us Wednesday eve in the gallery. Free and open to the public.

Leon A Serafim is faculty emeritus from the University of Hawai‘i at Mānoa, where he taught all levels of Japanese language, Japanese and Ryukyuan (Okinawan) linguistics, including language history and prehistory. He and a colleague, Kyoko Hijirida, planned and taught the first Okinawan language and culture course in the United States. He was the Founding Director of the University of Hawai‘i Center for Okinawan Studies. He has recently co-authored two books and several articles, all with Okinawan-related themes. He also coined the widely used term “Japonic,” referring to the group of languages spoken on the Japanese and Ryukyuan islands.

Alan Christy is a dynamic and celebrated teacher in the department of History here at UC Santa Cruz. Professor Christy is known for teaching many popular courses in History, including: Early Modern East Asia (40A), World War II Memories in the U.S. and Japan (80Y, co-taught with Alice Yang), Tokugawa Japan (150B), Modern Japan (150C), and The Japanese Empire, 1868-1945 (150D), among others. He is the co-director of The Gail Project.

Parking available in meters in the Porter College lot.