Tina Campt and A Black Gaze in Art 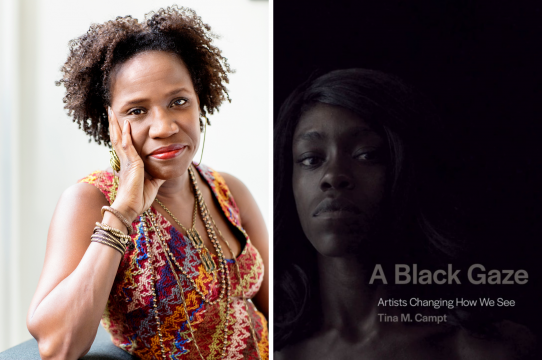 Black feminist theorist Tina Campt's newly released book, The Black Gaze: Artists Changing How We See, 2021, published by MIT Press, examines "Black contemporary artists who are shifting the very nature of our interactions with the visual through their creation and curation of a distinctively Black gaze."

Engaging works by artists including Deana Lawson, Arthur Jafa, Kahlil Joseph, Dawoud Bey, Okwui Okpokwasili, Simone Leigh, and Luke Willis Thompson, Campt argues that these artist's practices require "viewers to do more than simply look... [they] solicit visceral responses to the visualization of Black precarity."  The book has been hailed by Art in America as “a methodological offering [and] a theory of what Blackness brings to making and viewing art, and to perception in general.”

Join us for a talk by Professor Campt followed by a conversation moderated by Darren Wallace, PhD student, Film and Digital Media.

Tina M. Campt, a Black feminist theorist of visual culture and contemporary art, is Owen F. Walker Professor of Humanities and Modern Culture and Media at Brown University and a Research Associate at the VIAD (Visual Identities in Art and Design Research Centre) at the University of Johannesburg. She is the author of Image Matters: Archive, Photography, and the African Diaspora in Europe, Listening to Images, and other books.

Just Futures: Black Quantum Futurism, Arthur Jafa, and Martine Syms​ is presented in collaboration with the Institute of the Arts and Sciences. On view at the Mary Porter Sesnon Art Gallery from January 19–March 19, 2022.