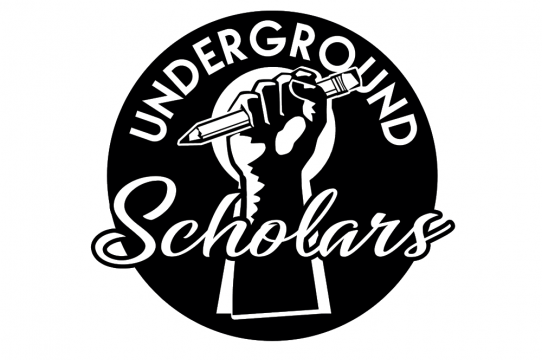 The Mary Porter Sesnon Art Gallery and Institute of the Arts and Sciences are pleased to present the next "Sesnon Speak Up" featuring a panel discussion with members of the Underground Scholars, a self-organized UC-wide group of support and advocacy of and for formerly incarcerated students and other system impacted students.

Abolish the University broadsheet - collaboration between the Underground Scholars and artist Ashley Hunt. Attendees of our event will receive a printed copy of the broadsheet.

The Underground Scholars Initiative's mission is to build community, awareness, and support among formerly incarcerated and system impacted students into higher education and proliferate the concept of a "Prison-to-University Pipeline." Founded in 2013 at UC Berkeley, the Underground Scholars Initiative has spread across the state with chapters at community colleges and UC campuses at UCLA, UC Irvine, UC Riverside, UC Santa Barbara, UC San Diego, UC Davis, UC Merced, and UC Santa Cruz.

This event is supported by the 2021 University of California National Center for Free Speech and Civic Engagement's VOICE Grant, with the theme of "Breaking Barriers."

Missy “MJ” Hart is an artist, abolitionist, and gang member turned activist after surviving the horrors of the criminal injustice system. MJ is on the Juvenile Justice and Delinquency Prevention Commission in San Mateo County and is a Founding Board Member with the org Pride In Truth. MJ is the Community Outreach Coordinator with the Underground Scholars Program at UCSC and recently earned their BA in Psychology with a minor in History of Consciousness. MJ is also a graduate student at Claremont Graduate University in the Positive Developmental Psychology Program and a Youth Organizer with Coleman Advocates. MJ strives to put the weaponization of their mind into action organizing with grassroots movements in their communities and beyond pushing a hard line for justice and transformational healing.

Alberto Lule became an artist while serving a thirteen year prison sentence. Art made the prison walls disappear, allowing Alberto to overcome both a physical and mental prison. Using mixed media installation, Lule critiques mass incarceration and particularly the California prison system. Alberto connects the similarities between institutions, from institutions of higher learning to correctional institutions, to expose and learn from a scientific and sociological perspective, but even more thoroughly through art and activism.

Ryan Flaco Rising has experienced drug addiction, gang banging, physical and mental abuse, incarceration as a juvenile, seven years in prison, and brutal prison riots which almost cost their life. While in prison, education became an outlet to address past trauma and writing helped Ryan grow a passion for learning. Through the Underground Scholars Initiative Ryan developed leadership skills and is engaged in finding solutions to end mass incarceration through collective first-hand experiences while thriving at UC Santa Barbara.

Shani Shay was born and raised in Puna, Hawaii. Shani spent her childhood playing in waterfalls and building sandcastles on the beach. At 15, Shani moved to Berkeley, California, and started attending Berkeley high school. Shani contributes to her classes and feels supported by the UC Berkeley community, specifically Berkeley Underground Scholars. Using the extensive network of resources at Cal Shani has created the first college preparedness workshop at Mt. McKinley court school and Berkeley Youth Alternatives. Shani has encouraged dozens of youth and incarcerated adults to find their place in higher education through her weekly workshops and asset-centered curriculum. Shani will graduate with a bachelor's degree in African-American Studies and a minor in education and hopes to attend the graduate school of education. Shani thanks the Underground Scholars Initiative and Berkeley Underground Scholars for the opportunity to lead. Shani is the recipient of the 2019 California Women in Leadership Scholarship from the Minerva Institute, 2019 Cal Alumni Leadership Award and is a 2019 Firebaugh Scholar whose research will focus on urban youths educational aspirations and Contra Costa resource efficiency.

Born and raised in Boyle Heights Aliso Village Projects Rodrigo Vazquez started organizing to end gang violence and build Black and Brown Unity. Vazquez assisted in the California campaign to reform the 3 strikes policy and to change confinement conditions for youth inside the YA. At UC Berkeley, Vazquez assisted in developing the Underground Scholars, and created statewide-programs with funding for formerly incarcerated students. Vazquez is now a graduate student at UCLA's Social Work Program.

The Sesnon Speak Up Series aims to provide a safe space for students and the UC Santa Cruz community to engage with critical ideas generated from our exhibitions.

UC National Center for Free Speech and Civic Engagement's Valuing Open and Inclusive Conversation and Engagement (VOICE) Grant Program provides funding for UC students, staff, and faculty who are interested in conducting research or coordinating programs and activities that further the mission of the Center.

Please visit the USI Language Guide
Language is not merely descriptive, it is creative. For too long we have borne the burden of having to recreate our humanity in the eyes of those who would have us permanently defined by a system that grew directly out of the the institution of American slavery, an institution that depended on the dehumanization of the people it enslaved. It is in this spirit that we, the formerly incarcerated and system-impacted academics who identify as the Underground Scholars Initiative (USI) at the University of California, Berkeley, call on the media, students, and public to utilize the following terminology when discussing our population individually or collectively.
–Underground Scholars Initiative

Press
Hansen, Merri. "Sesnon Gathers Underground Scholars to Share Their Goals, Stories, and Art." City on a Hill Press, May 2021