Artist’s Statement: I conceived my series The Nose as an exercise to broaden my portfolio. The title refers to the 1836 novella by Nikolai Gogol. The story follows Kovalyov, a neurotic government official who wakes one morning to find that his nose is missing from his face. The story is imbued with notions of insecurity, identity, the body, and the self. Inspired by Yinka Shonibare’s Dorian Grey series, I decided to use images from the 1963 short film, Le Nez, by Alexandre Alexeieff and Claire Parker, as inspiration for my series. Isolating certain images from the film, I considered how I might adopt the themes and emotions there for my own photographs.

I am also interested in the translation of media from one form into another. As Parker and Alexeieff were in artistic dialogue with Gogol when they adapted his text into film, I continue the conversation by using their animation as a basis for my photographs. The most interesting aspect of the conversation is the changes that each new iteration enacts.

I chose to pose for every character in my series, except for the nose itself, which is portrayed by a friend. Throughout the series, I play a low-level bureaucrat, a barber, the barber’s wife, a police inspector, and “the beautiful girl.” I chose to take on these roles myself for several reasons. Mostly, I believed that this choice would make room for a discussion about gender. Given that the loss of the nose can be seen as a symbolic castration, I thought it would be interesting to recreate this narrative from a woman’s point of view. Throughout this process, I began to realize what an inherently female story The Nose really is. Kovalyov’s loss of body autonomy connects strongly with my own delicate relationship to agency and power.

I view The Nose not as a completed project with a definitive message, but as a step I’ve taken  toward my goal of making better photographs and understanding my conceptual intentions. 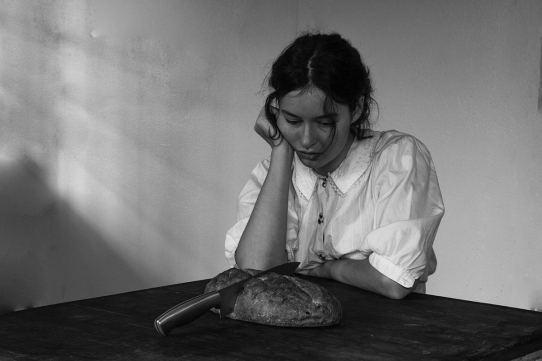 Ava Shields
Untitled (The Nose One) 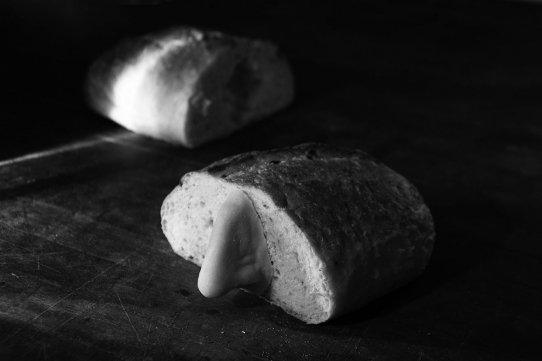 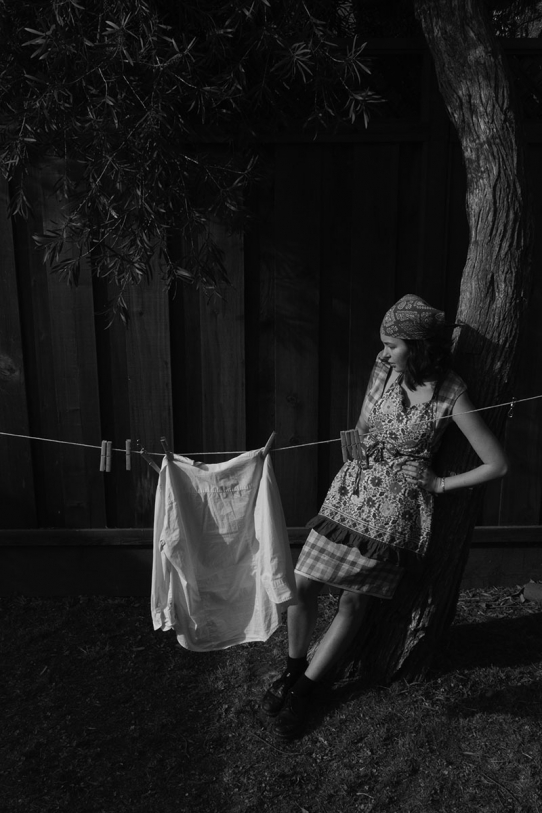 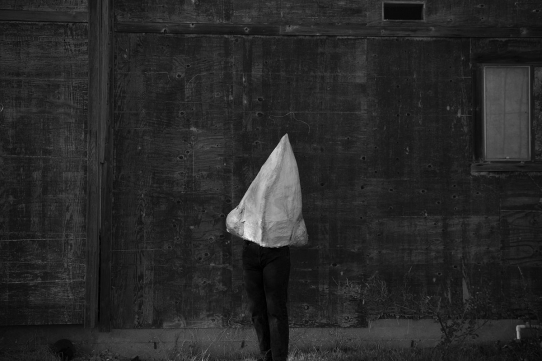 Series title: Fires of the Anthropocene

Artist Statement: The photo series, Fires of The Anthropocene, is centered around a Printmaker’s studio — Moving Parts Press — and documents their losses following the CZU Lightning Complex, as well as some of the effects on the surrounding forests. The work examines the ways in which humans mourn when treasures, historical artifacts, and bodies of work are converted into hazardous material in the blink of an eye, as a result of a large scale, climate driven wildfire. Through Fires of the Anthropocene, I have made sure to avoid the perpetuation of burning aesthetics, being sure not to glorify fires, and through this subversion, I acknowledge both human loss and the costs to the web of life and biodiversity that sustains humans. 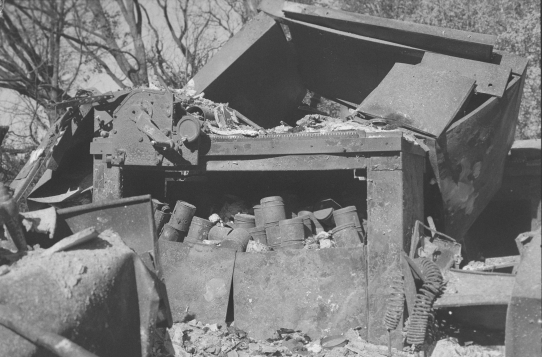 Grace Brieger
“Vandercook”
Film photography -- Kodak  T-max 400
The Vandercook sp15 was one of the 3 letterpresses at Moving Parts Press. Not only was this object valued by the printmaker herself and the surrounding community of artists alike, but this was an artifact from the past, an inherited treasure that held years of history and use. 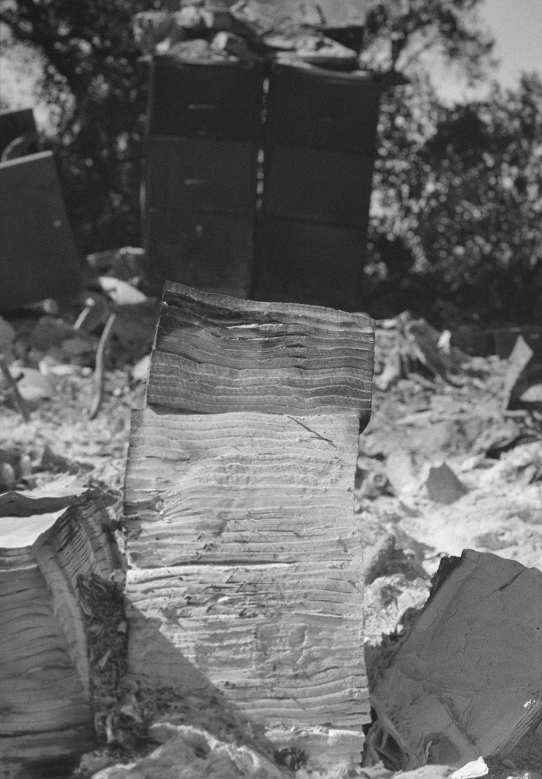 Grace Brieger
“A Burnt Archive”
Film photography -- Kodak T-max 400
With the loss of Moving Parts Press, was the loss of an expansive archive made up of broadsides, books, and both personal and collaborative projects. 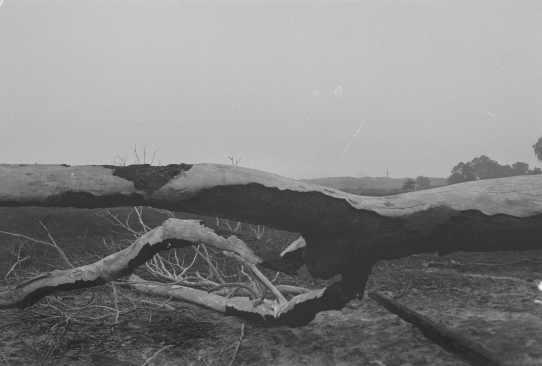 Grace Brieger
“Fallen Eucalyptus”
Film Photography -- Ilford HP5
This photograph serves to document the aftermath of the fire, on the outskirts of Big Basin, a state park that many in the area cherish. The documentation of human and biocentric loss side by side serves to further analyze the ways in which we exist amongst nature. With this fire came the loss of millions of trees. 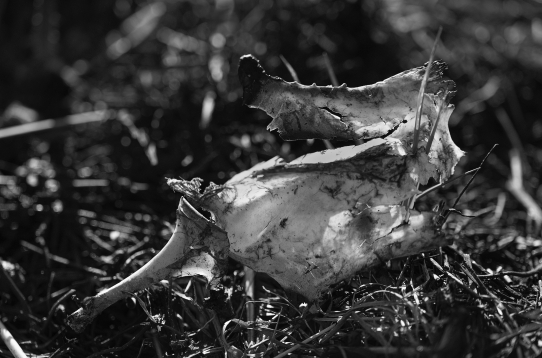 Grace Brieger
“Coyote”
Digital photography
Within the same site, I found countless burnt bones, indicating that dozens of species could not escape the fires quickly enough. It makes me wonder how many species were lost in the thousands of acres that the fire scorched.

My photography project is centralized around cinematography, where I am looking at having groups of images become chapters in a photo series. Each series is centralized on a woman, is personable, and has a theme. My project is looking at moments; utilizing the space, surroundings, and individuals to look at a narrative of each chapter. This catalog of images is best visualized as a curated book, where you can physically turn the pages of each photo series. Each photo group will be titled as opposed to each image, and each title is one part of the whole book. I am creating an artist photo website, where I am displaying these images in a digital format.

I create images that are timely and seem as if they were from another era. Not all but many of my series have a classical spin to them, for I want the viewer to see photographs as archives.  Having a narrative with the sequences of photographs conveys a story that is vital for this concept. Being able to explore this project by creating a lot of staged settings and selected clothing attire is important for me to take very selective images.  The photographs themselves each serve a purpose in a series of events over a time frame. I see this subject matter functioning profoundly in a photo project versus a videography project because it needs to be selective in terms of choosing which photos to shoot and present to people. Photography allows me to select what I want to showcase to the audience. When limiting the project to 15 final photos the real challenge is figuring out how to convey the message with little context and a few images. This differs from a film where you can see all angles and get a 2-hour long montage of scenes and graphics. Since this proposal is presented in still pictures, creating chapters breaks up the different people/places I shoot into individual sections.

I have been inspired by many photographers and have done extensive research on them to support my proposal. Lauren Naylor and Gillian Hylands are two photographers I have found to be extremely fascinating. Their use of color, setting, and woman subjects are stunning to me. Gillian Hyland's work is vulnerable and beautiful, where she creates supernatural staged images, presented as dramatized moments.  The composition of each image suggests a larger narrative within a single moment.  Her work is focused both on film and stills, and that is what I am so interested in, the line between film and photography. Lauren Naylor's work is more moody, where her images have undertones and otherworldly terrains that make fashion photography completely reinvented. Her images induce curiosity and are alluring, using creative set design and cinematic motifs to curate a landscape for her subject matter that is unattainably desired. She is a visual creator with a strong base on human emotion and expressive storytelling which I tend to use countlessly in my photographs.  Beyond these photographers, my research for this project also pulls from artist Sophie Calle. Sophie Calle’s work is referenced to be seen as “Chapters”, and although her images arent parallels to mine, her concepts of where the work lives and is shown are similar to what I am doing.

I feel very connected to this topic, where each chapter is a piece of myself. I am the girl who is at the bottom of the shower drowning in my emotions.  I am the girl who strolls through the park in obscure clothing and looks into the eyes of the camera.  Im also the girl in lingerie, the one who wants to be seen and pose with confidence.. Each of these chapters are vibrant with color and complete this cinematic story that can be placed in multiple films and scenes. I found that the contrast ofl color allow to create themes and moods that build these narratives that I’m creating.  When I was younger I always pictured my life in the eyes of a movie, something that was maybe all a dream or pushing against whats real and whats constructed. The images in this series speak for themselves. They have a conversation and a narrative. These moments in time stem from familiar locations and poses, and are reflected through models that know me personally and are open to do whatever it takes to create an image that is comfortable in front of the lens and can push the boundaries through it.

This project is something I plan to continue until the end of the school year in June. I will be creating the images of the chapters into a physical book that I make myself. This will be the second phase of this project, where I use the images I have taken already and work with them to curate the way they are displayed and perceived beyond a digital website format. Overall my photography project is well researched and thoroughly conceptualized to show an entire body of work.  Although it isn’t entirely completed, this series is in a very progressive state. I have a clear direction of what I plan to do to finalize the way the world can see the work I am doing, and I am excited to see where it eventually takes me when I get to the finalized state. 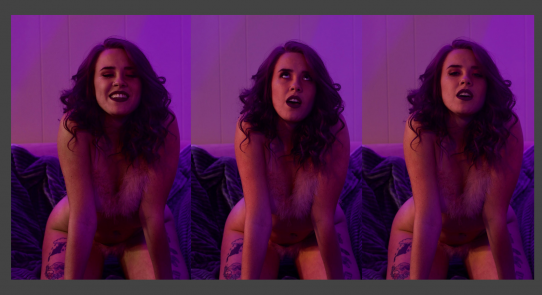 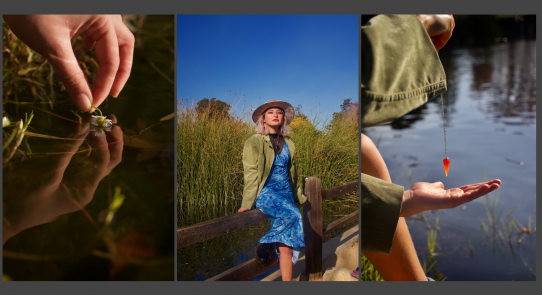 Reya Borbridge
“Westlake”
Digital Photography
This is an image in one chapter of an entire photo series labeled “Narratives and the Body”
This image takes place in the “Westlake” chapter. 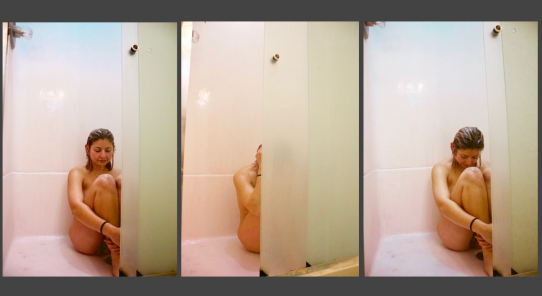 Reya Borbridge
“A Moment To Myself”
Digital Photography
This is an image in one chapter of an entire photo series labeled “Narratives and the Body” This image takes place in the “A Moment to Myself” chapter. 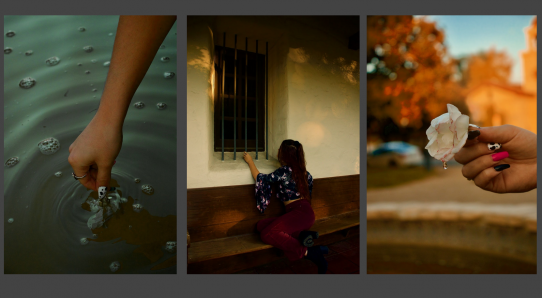 Reya Borbridge
“Enchanted”
Digital Photography
This is an image in one chapter of an entire photo series labeled “Narratives and the Body” This image takes place in the “Enchanted” chapter. 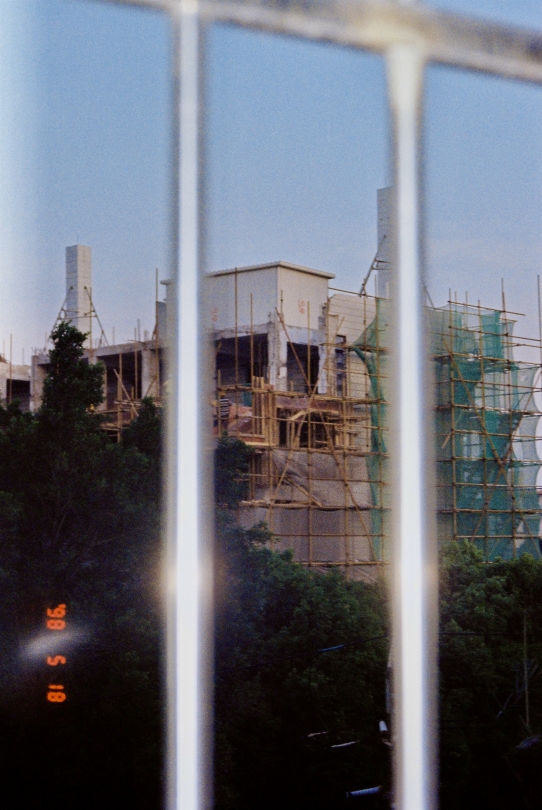 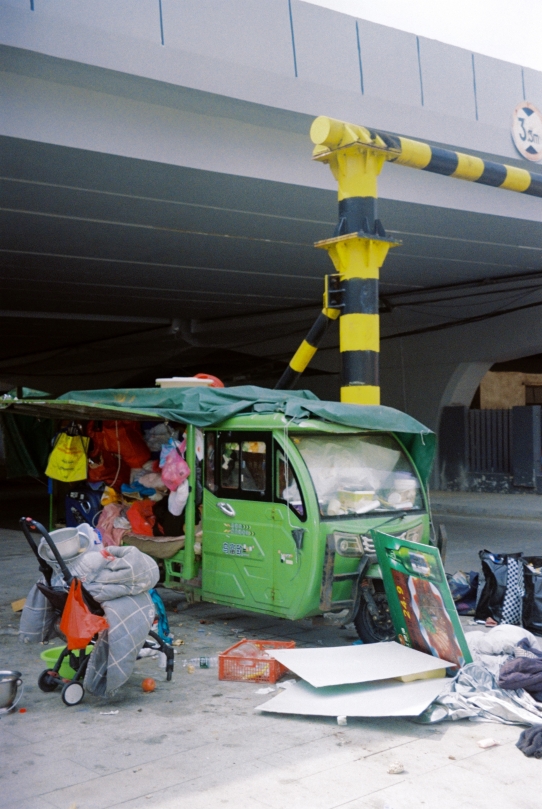 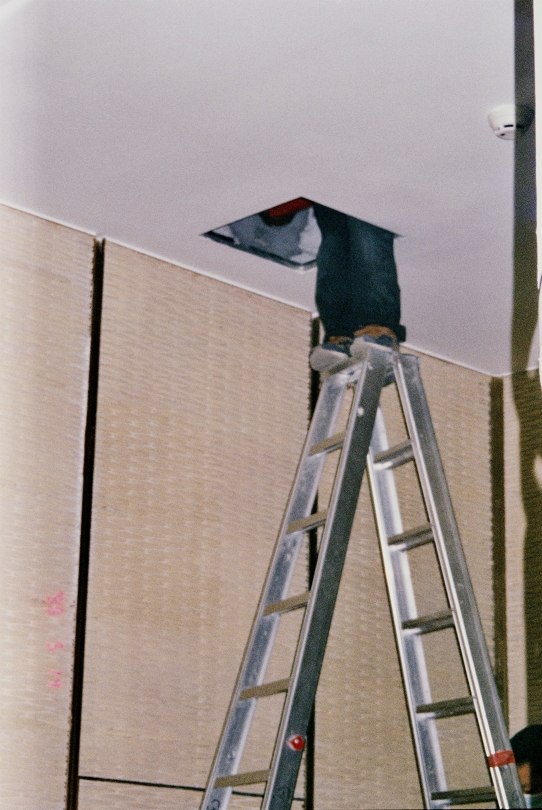 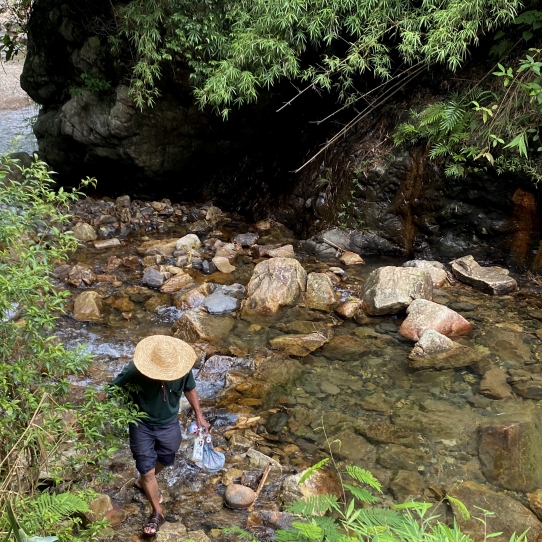 It is challenging for the audience to understand this work is about the pandemic without words accompanying the photographs. Maria Magdalena’s work inspired me a lot. According to my study of Maria Magdalena’s work, I realized one possible way to distinguish pandemic life from normal life is by using different elements that represent the pandemic in images. For example, a face mask is a very good element that can be used to directly indicate to the audience that this is about the pandemic. Other elements of this situation are having classes remotely and using hand sanitizer. 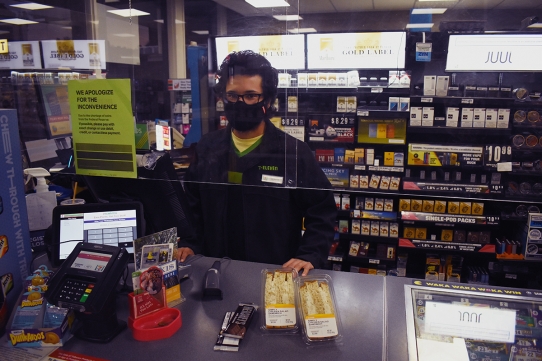 A cashier who is working even in pandemic 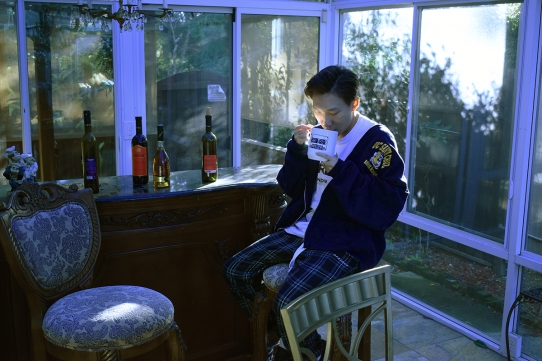 My roommate and I got up early in the pandemic morning 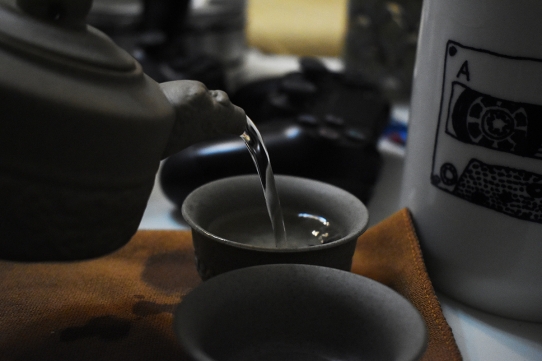 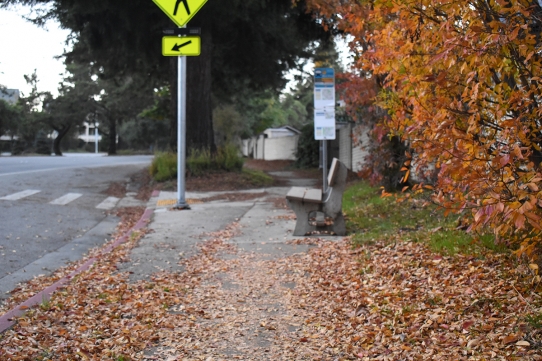 An empty bus station in pandemic