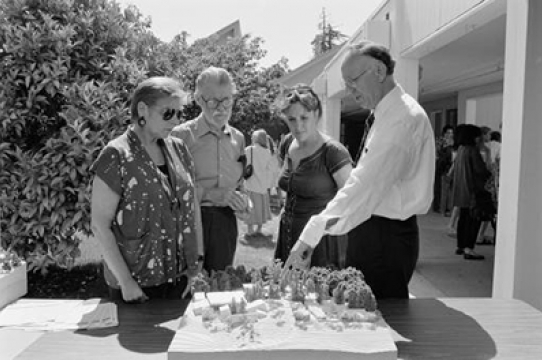 Joyce Brodsky passed away on May 11, 2019 at the age of 87. She was born in Brooklyn, NY, in 1932 to Samuel and Rose Goldman. Like a true New Yorker, she was imbued with a positive outlook on life, an intellectual dynamism, and an ability to embrace multi-culturalism. She said exactly what she thought and was unafraid of speaking the truth. She majored in art at Brooklyn College and in art history at New York University. She earned a master’s degree from Yale and while there, she was awarded a Fulbright (1959-60) to study medieval art in France. This spurred her passion for research-related travel which would last throughout her lifetime. From 1965-1992, she was a professor of art at the University of Connecticut in Storrs. In 1992, she was hired as the chair of the Art Department at UC Santa Cruz where she taught until 2005. In addition to teaching, Brodsky was a careful researcher and prolific writer. Her works included Experiences of Passage: The Paintings of Yun-Gee and Li-Lan, as well as monographs of artists, art historical works, and critical essays.

Professor Brodsky was a powerful role model. She mentored many female faculty members. Upon arriving at UC Santa Cruz, her first faculty hires were two women who were both lesbian feminist artists. At that time in the early nineties, hiring two women at the same time, much less two feminists, was regarded as a radical act by the University as a whole. As the current chair, and as one of those two hires, I can say with confidence that Joyce Brodsky set the tone for the Art Department’s current composition being a department with a majority of extraordinarily creative and powerful female faculty members. Our male faculty are also from diverse backgrounds. This is reflective of the fact that Professor Brodsky was a champion of diversity in the arts. Professor Brodsky introduced criticism and theory into the curriculum as an integral part of what students needed to study in order to become informed artists. In addition to her contributions to the University, Joyce always marched with the ACLU in local parades here in Santa Cruz. As Hannah Pederson, our department manager said, “It was always such a great pleasure to see her marching along, be it Earth Day or Gay Pride, she always walked the walk.” It was with this socially engaged spirit that Joyce Brodsky ushered the department into contemporary times and thus laid the foundation for our forthcoming M.F.A. in Environmental Art and Social Practice.

According to her daughter Shara, Joyce was funny, shrewd, and loving. Her family meant the world to her. Joyce moved to Santa Cruz with her mother Rose. Later, her brother Stephen moved into her Santa Cruz home and lived with her for many years. Her daughter Shara, and her husband Michael, live close by in the southern Bay Area. Joyce was a passionate and dedicated grandmother. At the age of 87, she was willing to go through a second aortic aneurism surgery because she wanted to see her grandson Zeke grow into a young man. Her family misses her terribly.

The faculty and staff here at the Art Department and throughout UC Santa Cruz will also miss Joyce. She was a frequent visitor to the UCSC campus and would often come up to take staff out to lunch, even these many years since her retirement. Joyce shared her love of art and art history, giving away some of her favorite books on these subjects to staff when she retired. She was a generous and insightful colleague and we are fortunate to have shared so much time with her.

Joyce’s family is planning a Celebration of Life that will take place in Santa Cruz, CA on August 4, 2019. If you are interested in receiving information about this event, please email Andrea Hesse at ahesse@ucsc.edu.