Zarina Hashmi, Artist of a World in Search of Home, Dies at 82 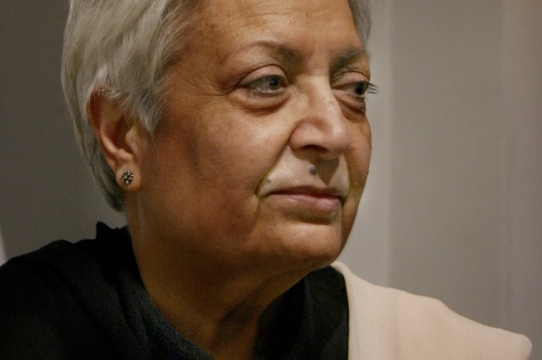 Zarina Hashmi, Artist of a World in Search of Home, Dies at 82

Ms. Hashmi was of a generation of artists whose life and work were haunted by the 1947 partition of India.

The artist Zarina Hashmi, who became internationally known for woodcuts and intaglio prints, many including semiabstract images of houses and cities she had lived in.

Story By Holland Cotter, May 5, 2020 ( https://www.nytimes.com/2020/05/05/arts/zarina-hashmi-dead.html?action=click&module=Well&pgtype=Homepage&section=Obituaries )

Zarina Hashmi, an Indian-born American artist who turned the history of her peripatetic life into an emotional and spiritual guide composed of spare images, poetic words and subtle politics, died on April 25 in London. She was 82.

The cause was complications of Alzheimer’s disease, said Imran Chishti, her nephew.

Ms. Hashmi, who preferred to identify herself professionally by only her first name, became internationally known for woodcuts and intaglio prints, many combining semiabstract images of houses and cities she had lived in, accompanied by inscriptions written in Urdu, a language spoken primarily by Muslim South Asians. (It is the official national language of Pakistan.)

In South Asia itself, she is particularly revered as a representative of a now-vanishing generation of artists who were alive during the 1947 partition of the subcontinent along ethnic and religious lines, a catastrophic event that, she felt, cut her loose from her roots and haunted her life and work.

Zarina Rashid was born on July 16, 1937, the youngest of five children, in the small Indian town of Aligarh where her father, Sheikh Abdur Rashid, taught at Aligarh Muslim University. Her mother, Fahmida Begum, was a homemaker. In her 2018 memoir, “Directions to My House,” she described growing up in what she called a traditional Muslim home. In hot months she and her older sister Rani would sleep outdoors “under the stars and plot our journeys in life.” The floor plan of her childhood house, whose walls enclosed a fragrant garden, became a recurrent presence in her art.

That life abruptly ended with the partition of India and the violence between Muslims and Hindus. Her father sent the family for safety to Karachi in the newly formed Pakistan. The experience of fleeing to a refugee camp and seeing bodies left in the road stayed with her.

“These memories formed how I think about a lot of things: fear, separation, migration, the people you know, or think you know,” she wrote in her memoir.

She eventually returned to Aligarh, near New Delhi, and earned a degree in mathematics from the university there, but the place would never be home again.

At 21 she entered into an arranged marriage with a young foreign service diplomat named Saad Hashmi, and a life of travel began. In 1958, they were posted in Bangkok, where her interest in printmaking started. In 1963, after an interlude in New Delhi, where she made friends in the city’s art community, her husband’s job took them to Paris. She attended the British printmaker William Stanley Hayter’s Atelier 17 workshop there, becoming immersed in European modernism, including abstraction.

In their four years in Paris, she and her husband began to drift apart. Once back in New Delhi, she essentially lived and traveled on her own. In 1974, she went to Japan. She had planned to stay two weeks; she stayed a year, studying woodblock techniques with Toshi Yoshida in Tokyo.

During this period, she experimented with printmaking conventions. She eliminated color. She printed grains and textures she found on scraps of wood. She punctured and slashed the surface of handmade paper, or built it up sculpturally with pulp.

When her husband died suddenly in 1977, she contemplated settling in India or Pakistan, where her parents then lived, but chose instead to move to New York City, which she had visited earlier. She found it difficult initially, living a bare-bones life alone in a small loft in the garment district.

“I had very little money, was depressed and never wanted to leave my house,” she wrote. “I felt eaten away.”

But gradually she became absorbed into the city’s downtown art world, largely through her involvement with the feminist art movement; she taught at the New York Feminist Art Institute, which opened in 1979 — and closed in 1990 — and joined the Heresies Collective, a group of feminist artists for whom she coedited the “Third World Women Artists” issue of their fabled journal. In 1980 she organized, with Ana Mendieta and Kazuko Miyamoto, an exhibition called “Dialectics of Isolation: An Exhibition of Third World Women Artists of the United States,” at A.I.R. Gallery, then located in SoHo. (It is now in the Dumbo section of Brooklyn.)

It was around this time that she began to make the themes of home and exile central to her art. “Some people who have come and settled in the United States don’t look back, but I’m not one of them,” she said in a 2017 interview with Courtney A. Stewart, a senior research assistant in the Department of Islamic Art at the Metropolitan Museum.

Near-abstract images of houses recurred. A 1981 cast-paper relief called “Homecoming” is essentially an aerial view of a courtyard surrounded by arches, reminiscent of the one in her childhood home. A bronze sculpture, “I Went on a Journey III” (1991), is a miniature house on wheels. The prints in a portfolio called “Homes I Made/A Life in Nine Lines” are based on blueprints of houses Ms. Hashmi had lived in from 1958 onward.

And in a print series called “Letters From Home,” Ms. Hashmi overlaid images of both house and city onto the texts of letters, often about family deaths and loss, that her sister Rani had written to her but never sent. Significantly, each letter is transcribed in Urdu script, as are many identifying labels in other prints. Urdu is gradually going out of currency in sectarian India. But for Ms. Hashmi it defined “home” as surely as images of maps and houses did.

“The biggest loss for me is language,” she told Ms. Stewart. “Specifically poetry. Before I go to bed lately, thanks to YouTube, I listen to the recitation of poetry in Urdu. I jokingly say I have lived a life in translation.”

Much of the Urdu poetry Ms. Hashmi cherished was associated with Sufism, a mystical strain of Islam that interested the artist deeply. Some of her later abstract prints, as well as sculptures in the form of prayer beads, directly refer to it. “I do believe in a spiritual life,” she said, “and I’m not embarrassed by that.”

It took time for Ms. Hashmi to find a substantial American audience, but there has been growing interest in her work in the past decade or so. She was included in important surveys, including “The Third Mind: American Artists Contemplate Asia 1860-1989” at the Solomon R. Guggenheim Museum in 2009 and “WACK! Art and the Feminist Revolution,” organized by the Museum of Contemporary Art, Los Angeles, in 2007.

In 2012, the Hammer Museum in Los Angeles organized a career retrospective, “Zarina: Paper Like Skin,” which traveled to the Guggenheim and the Art Institute of Chicago. Another survey, “Zarina: Dark Roads,” organized by Sarah Burney, took place at Asian/Pacific/American Institute, New York University, where Ms. Hashmi was artist in residence from 2017 to 2018. A third, “Zarina: Atlas of Her World,” appeared at the Pulitzer Arts Foundation in St. Louis last year.

She represented India in the 2011 edition of the Venice Biennale, and has had solo exhibitions at Gallery Espace in New Delhi since 2000. Luhring Augustine Gallery represents her in New York.

Ms. Hashmi chose, as an artist, to identify herself by neither her father’s name, nor her husband’s. In addition to her nephew, she is survived by a niece, Saima Chishti.

In recent years, the political scope of Ms. Hashmi’s work has sharpened, in prints that refer to anti-Muslim violence and the plight of persecuted refugees. Even then, in its scale and reflective mood, her art remains as personal and intimate as a diary. Regret colors the narrative. (“Nobody is left in our house at Aligarh. Rani is gone. My parents are gone. Home has become another foreign place.”) But something like serenity settled in.

“I have had people come to my show and start to cry,” she said in her interview with the Met. “I always ask them why, and usually they say ‘that is our story also.’ A lot of them were people who were exiles from their own country: Holocaust survivors, or people who had the desire to return home. I realize that if you tell your story and if someone can come and cry on your shoulder, that is sharing.”