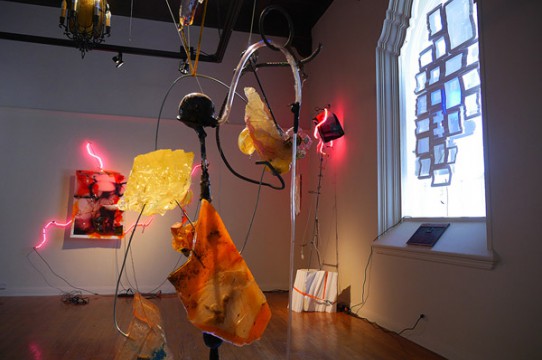 Dear Volunteers is speculative installation project that seeks to re-present toxicity as spectacle. Salvaged neon, rebar, lab equipment, styrofoam and other trash form the basis of this collaboration. The artists seek to refocus the lens of authorship through a reanimation of found objects. Concerned with asking rather than answering questions of relational teleology, "Dear Volunteers" weaves together mysteries of histories unknown to us through the combination of orphaned objects and images.

Founded in Philadelphia,"Dear Volunteers" is a collaboration between Tra Bouscaren and John Schlesinger. Bouscaren is a post-disciplinary artist represented by N2 Gallery in Barcelona. His work has been featured at the Museum für Naturkunde of Berlin, Victor I Fils Gallery in Madrid, Centre Cultura Contemporania de Barcelona, Santa Cruz Museum of Art and History, Fort Mason Center for Art and Culture in San Francisco, Hallwalls in Buffalo, Annenberg Center for the Performing Arts in Philadelphia, and New York's Lincoln Center. John Schlesinger is a photographer turned sculptor. His work has garnered a Rome Prize, a Tiffany Award and NEA Grants. Collected broadly, Schlesinger's output can be found at the Walker Art Center, the San Francisco Museum of Modern Art, the Houston Museum of Art, the Dallas Museum of Art, the Hamburg Kunsthalle, the Art Institute of Chicago, the Brooklyn Museum, and the MOMA.