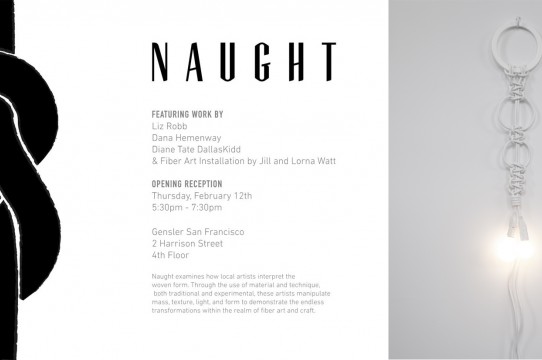 Naught examines how local artists interpret the woven form. Through the use of material and technique, both traditional and experimental, these artists manipulate mass, texture, light, and form to demonstrate the endless transformations within the realm of ﬁber art and craft.

I am excited to be showing three pieces as part of the group exhibition, Post Fabrication, in this great new space that has recently opened in Cincinnati, OH. I won't be at the opening, but if you find yourself in Cincinnati, I would love to hear what you think of the show!

Initiated thirty years ago, the Dorothy Saxe Invitational features specially commissioned works that respond to Jewish ritual objects. The 2015 exhibition considers tzedakah — The Jewish tradition of doing good to ensure others’ needs are met, often in the form of charity.

For the exhibition I have created a new work, in an ongoing series, where I cast brass mounts used to support precious objects, out of flexible rubber. I was interested in how these object mounts could act as an allegory to giving through my musings on the Jewish tradition of tzedakah––what kind of giving is truly supportive? And what kinds appear to be the same (holds the same shape) but in actuality provide no long lasting support?

Check back for more details as they are released, on the CJM’s website .

My work in the Santa Cruz Museum of Art & History atrium will remain installed into April 2015. If you haven't already I encourage you to visit the museum and check out their other exhibitions as well!