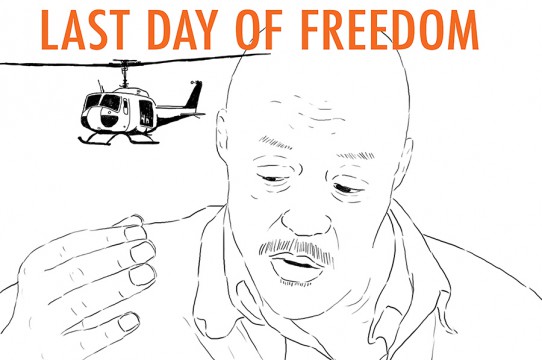 Join Lucas Artists Fellow Gregory Sale and invited guests, policy advocate Michael Mendoza and visual artist Dee Hibbert-Jones as they discuss their work with various constituencies involved in the US criminal justice system, and the challenges of creating opportunities for critical dialogue and lasting social change.

The conversation will be followed by a screening of the Oscar-nominated animated documentary film Last Day of Freedom, co-directed by Hibbert-Jones and Nomi Talisman, which tells the story of Bill Babbitt and his decision to stand by his brother, a Veteran returning from war, as he faces criminal charges, racism, and ultimately the death penalty.

Also: as a teaser for Montalvo’s upcoming exhibition Now Hear This! An Exercise in Listening (opening July 21), flutist, composer, and improviser Jane Rigler will introduce guests to the practice of "Deep Listening" and lead a short participatory activity designed to enable guests to explore new ways of listening to the world around them. Walter Kitundu will discuss a sound-based work he is developing on Montalvo's grounds for this new exhibition.