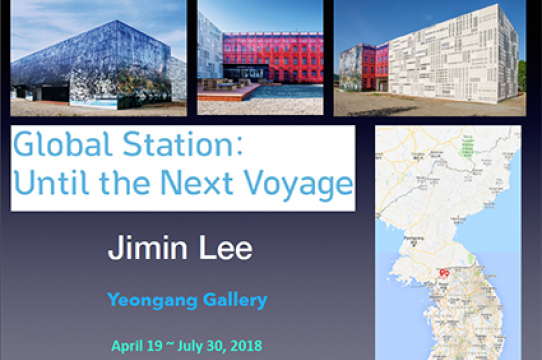 The Demilitarized Zone (DMZ) that separates North and South Korea is an unlikely setting for an art gallery.

Established in 1953 as part of an armistice agreement that ended three years of brutal war, the DMZ is a 2.5-mile-wide band that runs 155 miles across the Korean peninsula, serving as a buffer zone between the two countries.

Yet a new art gallery does actually exist in that strange locale. And this spring and summer, the Yeongang Gallery has been featuring Global Station: Until the Next Voyage, a solo exhibition by UC Santa Cruz art professor Jimin Lee, running April 19 to July 30.

“This is a truly unique art venue and first-ever art gallery within the civilian control line between the two Koreas,” said Lee. “The gallery, with an air-raid shelter next door, was once a security exhibition center before its recent renovation into an art gallery.”

For her exhibition, Lee selected about 35 original print works she began creating in 2013 that explore themes of the movement of the body and objects in space--in reference to migration, globalization, transportation, and mobility.

Lee noted that Yeongang Gallery and nearby Taepung Observatory are major tourist spots in the DMZ area. Since visitors have to leave their ID cards or passports at the checkpoint, she said she will be able to learn how many people might attend the exhibition, estimating about 1,000 to 1,500 visits per week, both from domestic and overseas tourists.

“Being a native Korean, the title of my exhibition--'Global Station: Until the Next Voyage'--came from my lifelong wish: a hope that this DMZ area would one day become a hub to link and reconnect the deeply divided country, people, networks, transportations and other physical infrastructures,” said Lee.

“I am thrilled to have an invitational solo show in the only art venue in this heavily armed border zone,” she added. “After visiting the DMZ, I was struck by the irony that this venue was actually very peaceful and within tranquil surroundings. Unexpectedly, I observed a very preserved and natural environment, and the gallery itself was surreal looking amidst the hidden paradise. I have shown my work actively around the globe, but I feel this might be the most unique art venue I have ever exhibited in.”

Lee said she was excited to learn that the leaders of North and South Korea had a historical meeting just one week after her exhibition opened in the DMZ.

“Coincidently, I had my first solo exhibition entitled ‘Somewhere/Irgendwo’ in Berlin last March at a gallery located in the “old” East Berlin. During that exhibition, I met some artists and visitors, and some of them shared with me interesting and emotional stories of their own experiences of isolation from friends and family. I was moved to hear a story about the historical David Bowie concert and how it played a role in triggering an East German rebellion. After the reunification of Germany, the German government began supporting the arts more--and in many diverse ways--which helped resolve and ease the numerous and ongoing frictions and conflicts between the two old partitions.”

“Holding this exhibition during a moment of possible political and historical change is really special,” she added. “Even though I don’t define my art as ‘political art,’ I feel somewhat empowered as an artist to be a part of this big change. I truly believe art can play a profoundly meaningful role in society and be a powerful impact on human life.”