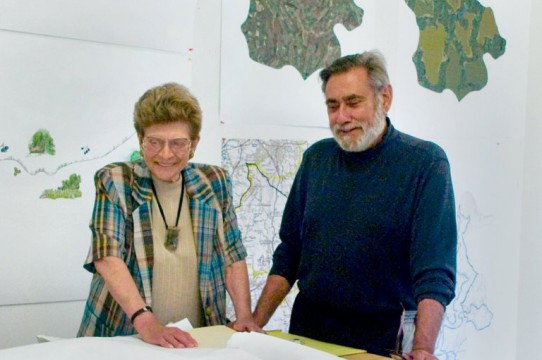 Helen Mayer Harrison, half of the husband-and-wife team known as the Harrisons, pioneers in the eco-art movement whose works blended elements of art, biology, environmentalism and more, died on March 24 in Santa Cruz, Calif. She was 90.

Her family said the cause was Alzheimer’s disease.

Ms. Harrison and her husband, Newton Harrison, were both well into careers as educators when. in the late 1960s. they began shifting their focus to making art, vowing that anything they created would involve ecosystems and environmental awareness.

Their artworks were unconventional, to say the least, pushing the very boundaries of what constitutes art. They made topsoil and grew crops in it. They consulted on urban planning projects in Baltimore, Europe and elsewhere. Well before global warming was in the public consciousness, they considered its likely effects through maps and other means.

And then there was “Hog Pasture,” one of their earliest works, created for a 1971 exhibition at the Boston Museum of Fine Arts called “Earth, Air, Fire, Water: Elements of Art.” They made an actual pasture indoors, with hopes of having a real hog root around in it. The museum, they recalled years later, was fine with the pasture but not with the pig.

In 2012 they re-created the work at the Museum of Contemporary Art, Los Angeles, and this time a pig named Wilma was allowed. In front of curious spectators, Wilma took eagerly to the pasture, searching for whatever it is that pigs search for in dirt.

“The significance of the piece is what you see,” Ms. Harrison said in a video of the exhibition. “All of the sudden people are looking at the environment in one way or another, and they’re looking differently. In other words, it’s bringing their attention in a way that is meaningful.”

Helen Mayer was born on July 1, 1927, in Queens. Her father, Henry, and her mother, Natalia Perla Wiseman, were both teachers.

She received a bachelor’s degree in English at Queens College in 1946 and a master’s degree in educational philosophy at New York University in 1949, then began teaching in the New York City school system. She met Mr. Harrison, an artist whose early focus was sculpture, in the early 1950s. They married in 1953.

After living for a time in Florence, Italy, they returned to New York, where, living on the Lower East Side, Ms. Harrison plunged into the causes and cultural movements of the early 1960s, especially the growing peace movement.

But by the beginning of the 1970s she and her husband were devoting themselves to making art of an earth-conscious nature. One of their first efforts interpreted that commitment quite literally: For “Making Earth” (1969-70), Mr. Harrison made topsoil in the parking lot of their studio, and Ms. Harrison used it to grow plants.

They came to call these early works their Survival Pieces. “Hog Pasture” was one. Another was a portable orchard, inspired by what they saw going on in Orange County, Calif.

“It was made with trees, and we brought them indoors,” Ms. Harrison said in a 2013 video interview. “We made it because we thought: ‘All the orange trees in Orange County are disappearing. The orchards are being cut down.’ So we made an orchard for the museum that would be the last orange orchard in Orange County. And it was, in all probability.”

The work was first exhibited at California State University, Fullerton.

To the inevitable question, Why the Survival Pieces constituted art rather than farming, Mr. Harrison had a ready answer.

“What we did in a series of museums was make work that, as an ensemble, added up to the food chain,” he said in the same interview. “So we were thinking quite differently than farmers do.”

The Harrisons moved into urban ecology in the 1980s, working on conceptual designs for a promenade in Baltimore, the reclamation of a debris pit in Pasadena, Calif., and more.

Not all of their works were so large in scale, however. Their contribution to the 1989 group show “The Drowned World: Waterworks” at the P.S. 1 Museum in Queens (now MoMA PS1) was a distillation device that purified water from the East River, showing the gunk it had contained.

In the 1990s and beyond, their projects took on a regional aspect, examining ecosystems and environmental degradation. These works might include an installation, videos, maps, urban designs and other elements and involve input from planners, biologists and others not generally associated with the art world.

Climate change was on the Harrisons’ radar well before it began making regular headlines, something Mr. Harrison credited to his wife.

“Helen Mayer Harrison brought to our collective work deep expertise in literature, educational philosophy and transdisciplinary research,” he said by email. “One startling example of this was in 1973 when she introduced global warming research, which then became the lifelong theme in our work.”

“Ahead of her time, and yet somehow very much of her time, Helen aimed to strengthen the connection between mind and everyday life through her work,” Susan Solt, the dean of that university’s arts division, said by email. “Helen blended the worlds of art and science so skillfully that ecologists, landscape architects, engineers and politicians were convinced to rethink their own contributions to our ecosystems.”

In addition to her husband, Ms. Harrison is survived by three sons, Steven, Joshua and Gabriel; a daughter, Joy Harrison; nine grandchildren; and four great-grandchildren.

In a 2010 interview, the Harrisons talked about their long partnership.

“People want to know who does what,” Mr. Harrison said. “What happens is, I do the first draft, Helen does the second, I go back in for the third, and then Helen has the final one.”

To which Ms. Harrison added: “So he has the first word, and I mostly have the last word. It works out.”