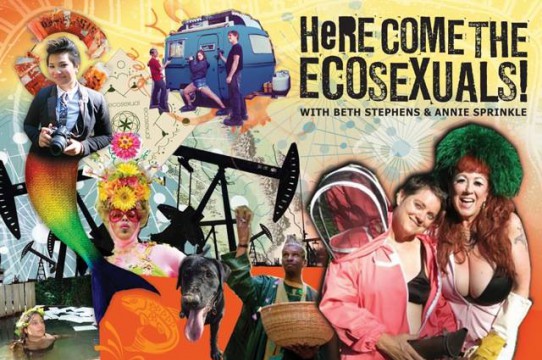 Here Come The Ecosexuals! Is a summer tour by two ecosexual artists, Annie Sprinkle and Beth Stephens. It consists of two parade contingents, a pop up performance, and educational talks all around the states. By shifting the metaphor from "Earth as Mother" to "Earth as Lover", we aim to entice people to develop a more mutual, pleasurable, sustainable, and less destructive relationship with the environment.

San Francisco, CA—Celebrated performance artists and mountain-top removal activists Beth Stephens and Annie Sprinkle have championed ecosexuality since 2008. In the last two years, the ecosexual movement has taken off, with people who identify as ecosexuals writing books, organizing academic symposia, creating ecosexy adult entertainment and producing many events to promote ecosexuality inspired by Stephens and Sprinkle’s work. “Every day we hear from people who are ‘coming out’ as ecosexual. This is hitting a cultural nerve that is relevant to activists and environmentalists right now” says Stephens.

In 2008, the two artists made a commitment to infuse the environmental movement with more play and sensual pleasure to counteract prevailing doom and gloom narratives about climate change, mountaintop removal coal mining, and water issues. That led them to develop the branch of academic study they called ‘sexecology’—which explores the intersection of sexology and ecology—and to focus their performance art and research on the budding field of ecosexuality.  They have since organized three International Ecosex Symposia, performed nineteen ecosexual weddings in nine countries, and produced and directed an award winning documentary, Goodbye Gauley Mountain—An Ecosexual Love Story, created in response MTR in Stephens’ home state West Virginia. Now many other academics, writers, artists and environmentalists have begun contributing to the body of ecosexual work.

In June, Stephens and Sprinkle will be joined by more than a hundred ecosexuals who will co-create public performances as part of San Francisco and Santa Cruz Pride parades, officially adding the E (for ecosexual) to the GLBTQII moniker.  The artists admit their work is inspired by Greenpeace, ACT UP and other highly visible organizations that use direct action tactics. Says Sprinkle, “We’re addressing very serious issues, such as California’s current water situation. We aim to entice more people to join the environmental movement by making it more sexy, fun and diverse.”

Stephens, a professor of art at UC Santa Cruz, says, “The Ecosexual movement is really about imagination and desire. As ecosexuals we feel that humans are not better than other species, and we are not separate from the ecosystem around us. We are part of the Earth and it is part of us..” Sprinkle adds, “Actually all sex is ecosex!”

“Our detractors say that ecosex is really perverted and all about having sex with trees” Says Sprinkle, “The Ecosexual movement is about reframing the narrative of “Earth as mother” to Earth as lover”. We expect our mother to take care of us, but we desire to take care of our lover. It’s a more mutual, equal relationship with the natural world. We invite people to imagine the Earth as lover through our research, art projects and public performances.”