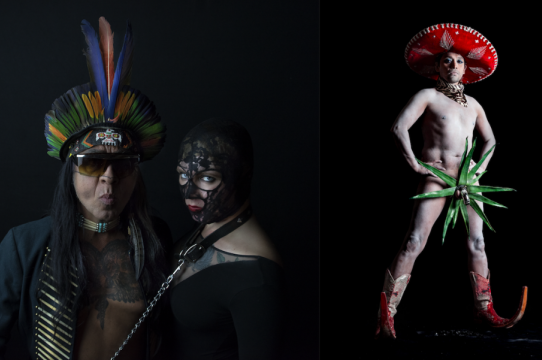 The Institute of the Arts and Sciences, in collaboration with E.A.R.T.H.L.A.B. and the Art Department, invite you to Traction: Art Talk featuring a performance Guillermo Gómez-Peña. Gómez-Peña (US/Mexico) is an internationally renowned performance artist, writer, activist, radical pedagogue, and director of the performance troupe La Pocha Nostra. For Traction: Art Talk, Gómez Peña will perform "The Most (un) Documented Mexican Artist," an enhanced solo work with cameos by Balitronica Gomez and Saula Garcia Lopez.

"The Most (un) Documented Mexican Artist" is Gómez-Peña's latest solo work. For the performance, the artist draws from his 30 year old living archive and combines new and classic performance material to present a unique perspective on the immediate future of the Americas. His-self styled “imaginary activism” invokes performance art as a form of radical democracy and citizenship.

This event is FREE and open to the public. Parking is available in the Arts lot ($5 at the on-site pay station).​

Guillermo Gómez-Peña is a performance artist, writer, activist, radical pedagogue and Artistic Director of the performance troupe La Pocha Nostra. Born in Mexico City, he moved to the US in 1978. His performance work and 11 books have contributed to the debates on cultural & gender diversity, border culture and US-Mexico relations. His art work has been presented at over nine hundred venues across the US, Canada, Latin America, Europe, Russia, South Africa and Australia. A MacArthur Fellow, Bessie and American Book Award winner, he is a regular contributor for newspapers and magazines in the US, Mexico, and Europe and a contributing editor to The Drama Review (NYU-MIT). Gómez-Peña is a Senior Fellow in the Hemispheric Institute of Performance and Politics, a Patron for the London-based Live Art Development Agency and in 2012 he was named Samuel Hoi Fellow by USA Artists.

Balitronica Gomez (USA/Mexico) is a poet, performance artist, and radical pedagogue currently living between San Francisco, Mexico City, and The Road. Born on the US/Mexico border of San Diego/Tijuana in the 1980s, she holds a BA in Literature from San Diego State University and an MFA in Performance Poetry from Mills College. Her performance work has been largely influenced by her time spent living in a 17th Century Catholic Convent in Paris where she lived with a Dominican Order of Nuns. She has been touring internationally with Guillermo Gómez-Peña since 2013 and is a Core Member of his legendary performance troupe La Pocha Nostra.

Saul Garcia-Lopez is a performance artist, radical performance director, pedagogue, PhD candidate in Performance, and Co-Artistic Director of La Pocha Nostra. As a scholar and artist he explores the pedagogical intersections of acting and performance theory and practice, indigenous strategies of performance, ethnicity, gender, post-colonialism and indigeneity. His artistic work is body, text and multidisciplinary based and aims to dislocate/challenge assumptions of cultural representations by embodying simultaneous and contradictory identities and actions. Garcia-Lopez trained as a contemporary dancer and actor, and as a psychologist at the National University in Mexico. He also completed a Post Graduate Diploma in Directing at VCA, Melbourne University, Australia, and a Drama and Film Honors Degree at WITS University, South Africa. He has presented his work (as performer artist, pedagogue and radical director) in Europe and the Americas, Australia, Canada, Mexico, USA, UK, South Africa. He is co-editor of the Almanac of Live Art, board member of the Toronto Free Gallery, and teacher at the Centre for Indigenous Theatre in Toronto.