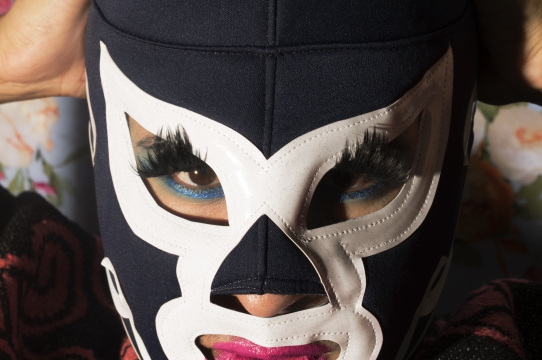 We are very proud to share that UCSC Art Department Alum Jorge Gomez-Gonzalez is featured at the Museum of Art and History (MAH) here in Santa Cruz. The exhibit is open from March 15, 2019 - January 26, 2020

Link to the show:

"I have been working to better understand and embrace myself in the making of Idolos (Icons), an ongoing response to my realization of my intersectionalities and that many of my peers are unaware of many different sides of gay and latin cultures, in which I identify with both. In Idolos (Icons), I stage myself as various latin icons who have impacted my life which include: t.v. personalities, 80’s music idols, and significant historical figures that represent Mexican narratives.

A very important aspect to this series is understanding the feelings of isolation caused by  the lack of representation in both gay and mexican culture. When I came out at age 12 I quickly felt like I had to distance myself from Mexican culture because I felt it started to reject me for being gay and it no longer was the safe space I thought it was. As I started to be more apart of the gay community I also realized the representation of queer people that looked like me was very little, and that both gay and mexican cultures often clashed and it was often based on values, and misunderstandings. In 2017 I realized I separated both cultures and never celebrated my intersectionality of being a gay mexican man because I simply never saw anyone else do it. So I started Mi Vida Con Maquillaje which documents how I express myself as a gay mexican man through makeup, within the series I use Capitulo 4: Idolos to creates environments in which i take latinx idols and queer them to represent me as a gay mexican man.

Through this series I have been able to better understand myself and the roots I have come from. I have been able to explore the importance of makeup with regards to the gay community and I discovered that its a very powerful tool that allows us to express ourselves, to transform into anything we want to be, and it allows us to momentarily escape this very homophobic world and live in a fantasy where we are safe."