UCSC Alumnus Raphael Villet at the Oakland Museum of California 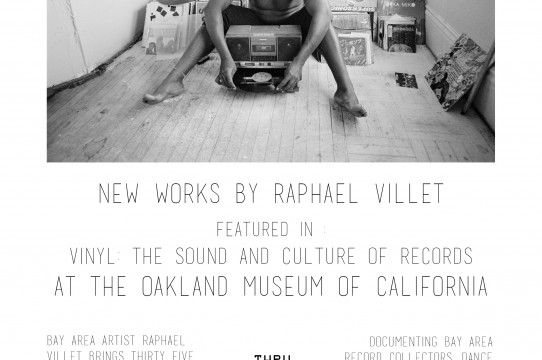 Artist Raphael Villet collaborates with the Oakland Museum of California
Through photographs and audio recorded conversations, Raphael Villet spent four months documenting the many different relationships that people have to records here in the Bay Area. He brings these observations and conversations to the current exhibition "Vinyl: the sound and culture of records" at the Oakland Museum of California.

Featured in the exhibition are thirty five photographs and a fifty five minute audio documentary by Raphael Villet.

About the projectConducted in January through April of 2014, these recordings bring you into the homes and hangouts of a diverse cross section of Bay Area residents. Starting with his friends, Raphael Villet sought out big and small time record collectors, event dj's, radio dj's, bands, and record label owners. The goal was to bring insight into what records mean to so many different people here in the Bay Area.

Peer into the lives of people like Brontez Purnell, pictured above, a resident of Oakland, CA who, while amassing an eclectic collection of music for djing and personal inspiration, has also recorded his own music onto vinyl. Or Peter Avilla, from Richmond, CA who has a 45 rpm record player in his 1955 Cadillac, and a fully loaded jukebox in his kitchen. Hear Alec Palao of El Cerrito, CA talk about discovering the complete original recordings of the once prolific Music City record label of Berkeley, CA and the efforts it took to re-release the collection and bring royalties to all those long gone artists.Zine - Raphael Villet has also produced a 48 page zine of the project, titled "Bay Area Record Collectors." It includes photographs and a download code for the full audio component of this project.


Printed at the Berkeley Art Museum at "The Possible" exhibition

About the Artist
Raphael Villet, raised in San Francisco, now lives and makes art out of his studio in Oakland, CA. Working primarily with photography he has produced several solo and group exhibitions here in the Bay Area. He has published artwork through HamburgerEyes of San Francisco as well as self publishing his own books and zines. He also makes video art and paintings and oscillates between making work that documents the lives of others and his own.


Viewing
Up through July 27th, the work is featured in the current exhibition "Vinyl: the sound and culture of records" at the Oakland Museum of California. Information below.

Explore the social and cultural phenomenon of listening to, collecting, and sharing records in Vinyl: The Sound and Culture of Records. Delve into a uniquely Californian take on this popular medium with experiences ranging from individual and group listening stations to informal talks and live performances. Organized by OMCA Senior Curator of Art René de Guzman, Vinyl opens on April 19, 2014, to coincide with Record Store Day, an annual event that celebrates the unique cultural contributions of independent record retailers worldwide.

Produced by the OMCA