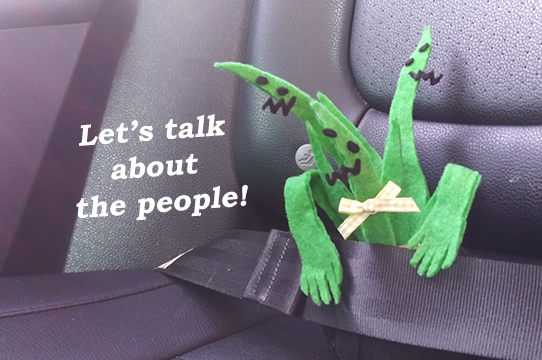 Hey hey! I’m Katana Parker. My work involves the Katana World, a fictional world I’ve been thinking about and tinkering with since high school. To put it technically, in terms of my practice, the Katana World acts like a black box for generating new ideas and is often character-driven. This world and the beings in it allow me to connect myself with any idea or aspect of life in a personally meaningful way. Things like peanuts and rocks, or things I wouldn’t usually find very interesting can suddenly have greater significance! It’s kind of like a culture of my own where I can both create and observe it, with fantasy and reality able to play off of each other symbolically. I still don’t really know the point of all this yet, but I do know that it’s fun and that the people and ideas in my head are counting on me to express them!

There isn’t a defined story behind it, at least not in the traditional sense, so don’t worry about feeling too uninitiated as you look around. It’s more conceptual than it is about things being expressed in a particular way even if this show features visual art. Things are always flexible in the Katana World, with ideas being as deep or complex as you’re willing to let yourself imagine!

Not all beings or people of the Katana World are featured here, but here are a few works I’ve done that I feel are reflective of my best efforts as a student so far while also featuring Katana people. 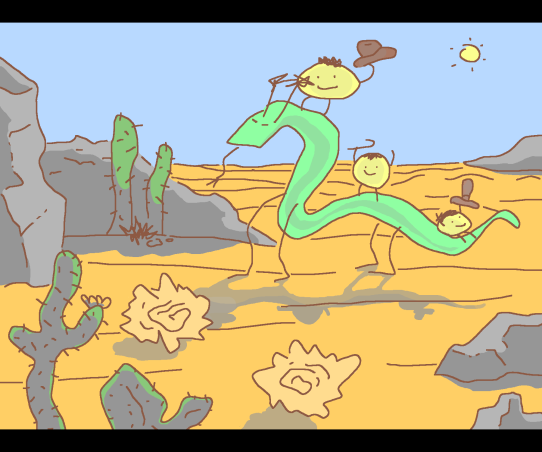 DESCRIPTION: “Some Greebes posed for a photo atop a hairless-looking horse. They seem to be having a good time. Greebes are a small circular people that are interested in ‘promoting wellness’. Come in a variety of colors and sizes. They have been raising baby bunnies that came from Mars since Easter last year.”

The earliest people in the history of the ideation of the Katana World. I thought they seemed like a good idea. Everything else has spiraled and sprung into existence from thereon. 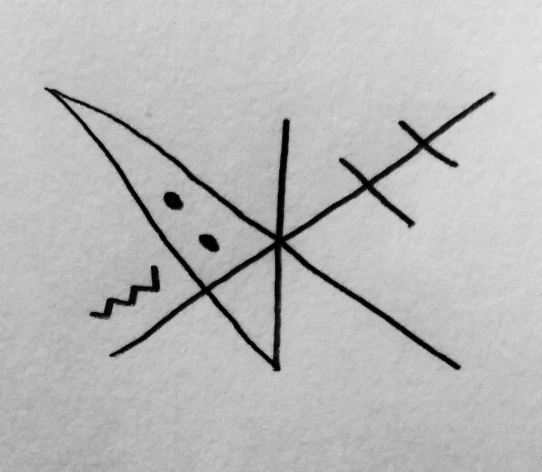 DESCRIPTION: “A picture of me <3. I am a little line shark. I spin, squeak, and float around here and there. I am interested in what the people do. I am surprised by my own existence.”

A sort of God-figure that has some involvement in the creation of this Katana World, though no one is aware of its power. It likes nice things and having fun. It is a Sign.

DESCRIPTION: A short animation capturing something that happened to the Line Shark one day.

The Katana World has grown out of many instances of “checking in” with “the people” and thinking about what they’re doing or what happened to them today either on an individual or societal level. Sometimes big events are happening, but oftentimes there are many ordinary days.

DESCRIPTION: “Two movie-poster-sized posters of a plant at what must be a—”

“-HELLO! I am Dracaena Katanacus and I have made these pictures to make people want to come to my beach!! If you will look at them you will learn about me and why you should come to the beach. Please read it if you are a Rock!”

Part of my favorite project I’d done during my time at UCSC. Spring 2021 saw the first appearance of the Dracaena Katanacus, a snake plant that’s currently living happily at a certain beach. More information can be found on this project here! At the bottom of the page within the link, you can even visit the beach in a virtual space! 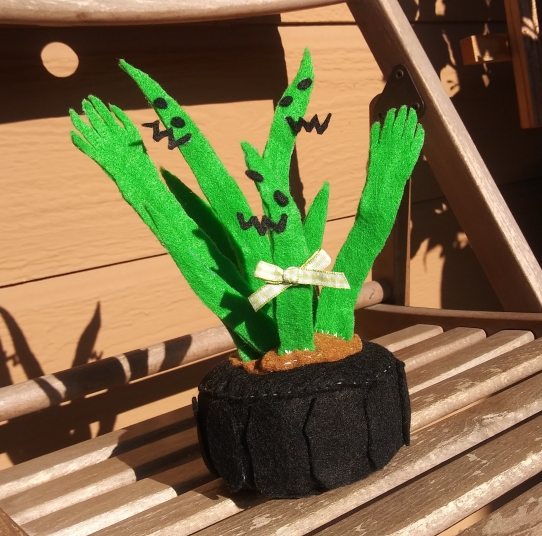 DESCRIPTION: It’s the Katanacus Mini - FABRIC. You say “fabric” with special emphasis. This small felt Katanacus is currently living at my house, floating around, moving itself and my stuff around with its mind. It exudes a very big aura, despite its mini-ness. 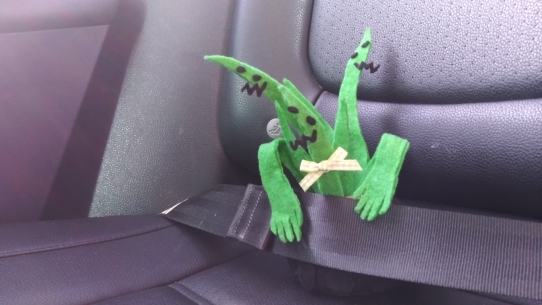 Title: Katanacus in the Car

DESCRIPTION: It likes riding in our family car. At the beach where it’s from, there were no cars that would move anymore, so being able to ride in one made it very happy. 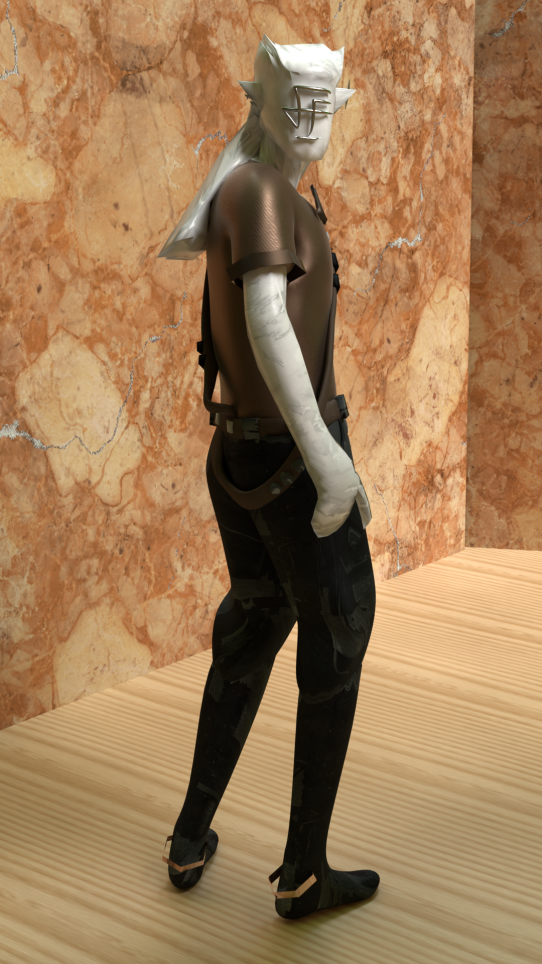 DESCRIPTION: “A photo of Fairmont Cleaver, a student at Rock University in the Line Country. A 2nd-year student studying Archaeology. Gives the impression of a lonely guy. He’s very passionate about his major and is very bad at writing essays, but he does try hard at his studies. His professors have trouble remembering his name correctly. Marble with a platinum face.”

Fair is a Line person. Line people are living sculpture people. They face some difficulties with my other peoples, especially the Lizard people, because their existence is difficult for them to understand. Line people come in all sorts of natural materials, mostly stones, metals, or a mix of other things. Their features can vary greatly, but they’re mostly humanoid and all share faces made of “lines”, which do work like faces usually do. Art is a huge part of their society’s culture and functioning. Due to their biology, they tend to be more environmentally concerned than most. 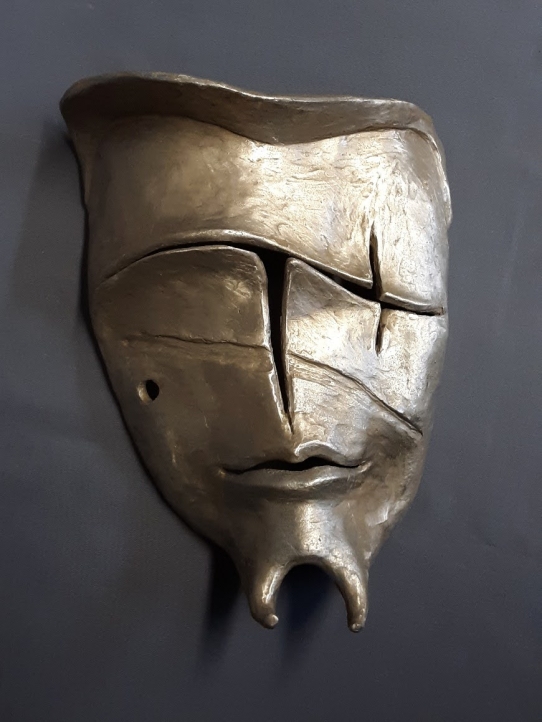 DESCRIPTION: “A mask-like representation of Ian Shore. Ian is another college student and friend of Fairmont, though the two aren’t really that close. Ian is majoring in art history because he doesn't know what else to major in and thought it would be easy. Ended up stuck at the bottom of an abandoned mineshaft as a child before being rescued centuries(?) later. He is fanatical about baking and eating bread. He’s been slacking a lot this quarter, spending a lot of time playing video games with his friend, Cole, instead of turning in his assignments on time. In reality, rather than bronze, Ian is a dark-gray concrete, with copper features.”

Line people freeze up and go into stasis if they don’t get enough sunlight. Lack of sun will cause them to become forgetful and lethargic, in the most extreme cases, forgetting they’re alive and who they are completely! More people are being recovered every day who have gotten lost, abducted, or stuck in the past, sometimes from hundreds of years ago.

After gathering most of these images for this show, Cole got mad and said I also needed to put a picture of him too because it wasn’t fair that only Ian got to be in the show.

Cole is a student from a very cold and small island in the Line Country. He’s a first-generation college student and the first in his community to be attending “a really big and fancy school” like Rock University. Cole is very interested in “being popular”, though Ian seems to be his only closest friend. The two met while Cole was starving and looking for food after the dining halls closed. He met Fairmont while looking for people to help him make a ghost hunting video for YouTube. 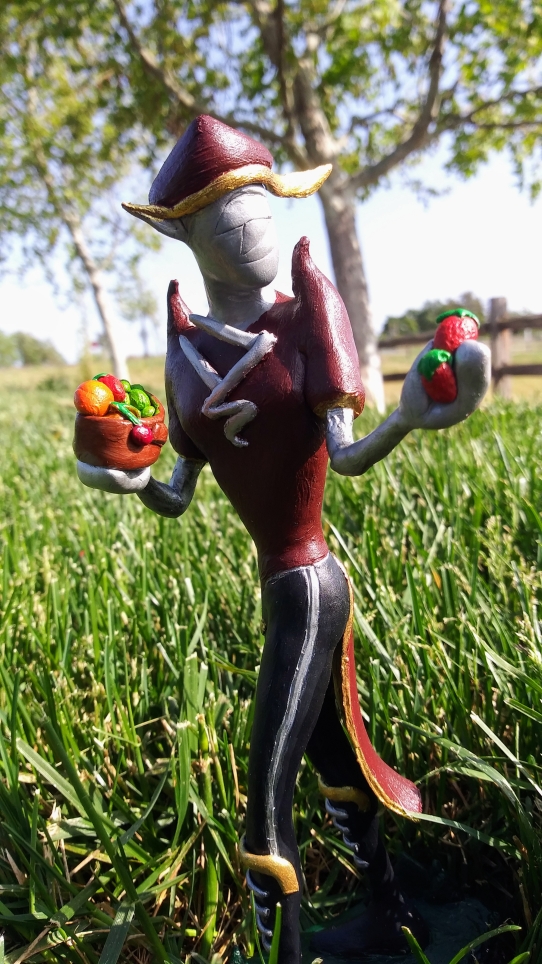 DESCRIPTION: “A silver Line who fell out of the sky at the Wood District’s annual Strawberry Festival about two months ago. A messenger on a ‘very important mission’ to deliver a message to someone on behalf of some ‘too big to try to explain’ empire that no one’s ever heard of. It’s a little unusual to see a Line working as a mail carrier, but according to the Birds at the post office, their uniform and credentials appear legitimate.”

According to her, she was flying and crashed into a “small, shrieking UFO” that “smelled like burning” before ending up at the strawberry festival. He’s never been to a strawberry festival before and had mistaken it for some sort of afterlife, crying about how he had failed his mission thinking they had died in an accident. I think they go by any pronouns since they don’t seem to mind people calling them whatever. It changes in my head from time to time. Eithan is currently the first “named person” in the Katana World on a more traditional-seeming journey. Unbeknownst to her, by crashing into that UFO, she has escaped a bleak and most hopeless reality. I wonder about their future. 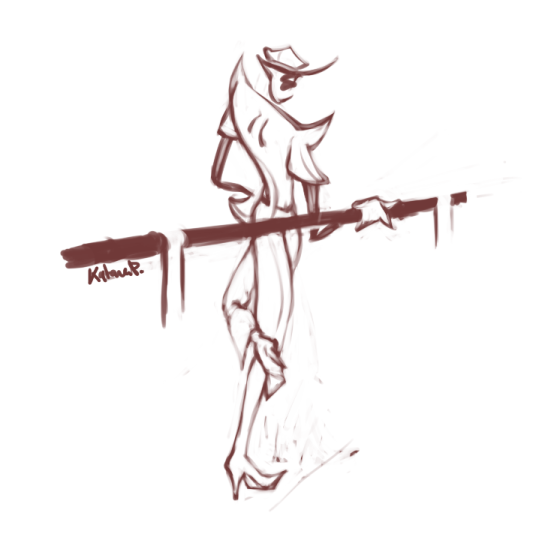 DESCRIPTION: An alternate or early depiction of Eithan. He appeared to me in winter in a drawing assignment where we were to depict our interpretations of characters from different stories of our choosing. 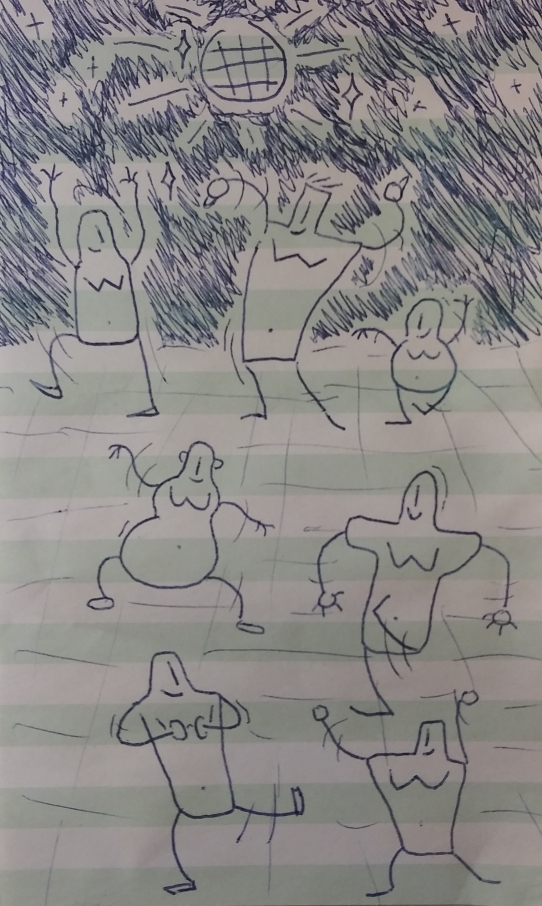 DESCRIPTION: “It’s rare to see so many at once!”

A most ancient and elusive people who resemble small stone figurines. Not much is actually known about them and they tend to run off when spotted. They’re usually only a few inches tall and can be seen conducting ritualistic behaviors out in nature away from the other taller peoples. To see one in winter or when it’s very cold is often seen as a bad omen; any other time is usually viewed as a sign of good fortune. They’re generally thought to be an all-female people existing in areas all over the world. Depending on geographical location, they appear in different "styles". 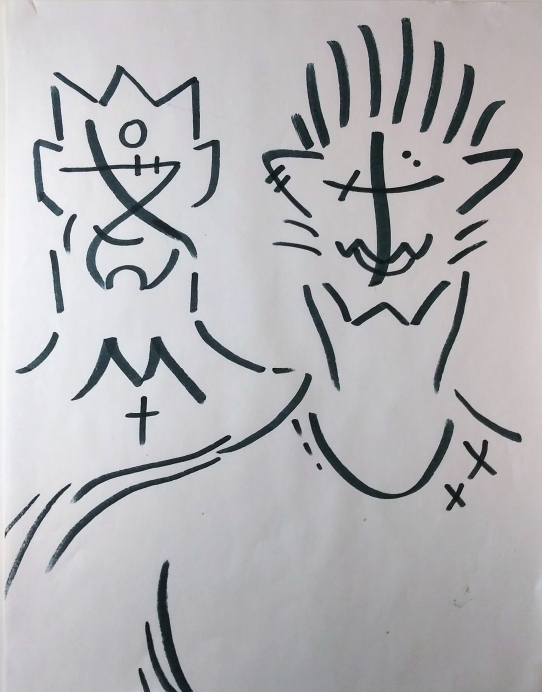 DESCRIPTION: The guy in the back is James with the one in the front named Zap I believe. It’s been a while since this was done so my memory is a little fuzzy. I don’t know them personally, but they were very nice and let me draw a picture of them. Lines are always fun to draw, especially with markers!

DESCRIPTION: While there have still been no known cases of Covid-19 on the Moon, during 2020, there was a slew of mysterious moonquakes that occurred causing a lot of chaos. These are some photos I took of some students at Hopalong University after an interview with them. In the interview, I came to ask what it was like to experience the historic quakes, along with their thoughts on the Earth situation at the time.

A very recent gif I made in animation class. It seemed like a good way to cap things off.

Thank you for looking at these Katana-works.

The people are also very pleased… yes, collectively, in this very moment!