The William Hyde Irwin and Susan Benteen Irwin Scholarship is our most prestigious student scholarship.  At the end of Fall quarter, thirty students are nominated by full time faculty to submit work for competition. Art students, make sure that you are on their radar and that the faculty know who you are by being active in class, attending office hours and working closely with faculty on your projects. If you are interested in being considered do not hesitate to set up an appointment with a ladder rank faculty member to ask them specifically what you can do to be considered as an applicant. Ladder faculty meet as a group at the beginning of Winter quarter to select the year's Irwin Scholarship recipients. Exceptional students from each area are invited to apply in Winter.  Selection is based on the excellence of the nominees' creative work. Approximately twelve students receive $2,500 and a highly-publicized group show in the Mary Porter Sesnon Gallery during Spring quarter. 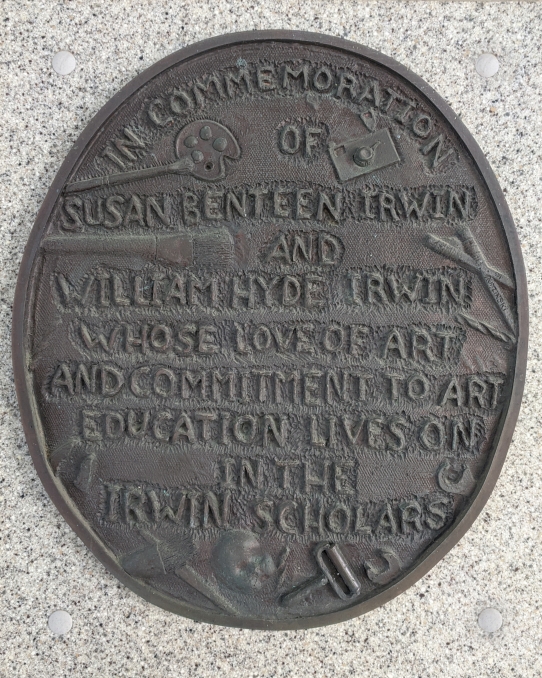 About the Irwin Family:
Susan Benteen and William Hyde Irwin retired in San Lorenzo Valley, after noted careers in the San Francisco arts community. The two shared a lifelong interest in the arts. William Irwin was a professional painter and they both taught art at San Francisco State College (now San Francisco State University) from 1932 to 1947. Susan Irwin also served as supervisor of art for San Francisco Unified School District.

After her husband’s death Sue Irwin established the William Hyde And Susan Benteen Irwin Scholarship Fund in 1986 in honor of her husband with a check for $10,000. Sue Benteen Irwin wanted others to have the same kind of art education that allowed her and her husband to flourish in a thriving arts community.  Susan Irwin received a scholarship to attend Columbia University. When she died in 1990 the endowment totaled $500,000, which provides $2,500 scholarships annually to art students in visual arts. Today the endowment has grown to over $1M generating at least 12 annual merit scholarships plus Irwin project grants open to all art students to apply for each quarter. This scholarship shows the far-reaching effects of donor support for the arts.

William Hyde Irwin (1903 - 1982). William (Bill) Irwin was born in San Francisco, California on Oct. 14, 1903, son of painter Hallie Hyde and journalist Will Irwin. In 1910, the family settled in Brookdale where his mother designed and built the beautiful home called Rivercroft. Raised in an artistic home he first was taught to paint by his talented mother. Following his education at Stanford University, he pursued art studies at the CCAC, Académies Moderne and Colarossi in Paris, and at UC Berkeley. He later taught art at Santa Cruz High School and San Francisco State University. He enjoyed painting scenes and buildings in the San Lorenzo Valley.

Susan J Benteen (1908 - 1990). Susan Benteen was born in Watsonville, CA on April 14, 1908. Benteen earned an M.A. degree at UC Berkeley and her teaching credentials at Columbia University. She further studied at the CCAC, Chouinard Art Institute in Los Angeles, Schaeffer School of Design in San Francisco, and with Hans Hofmann. After 1932 she was an art professor at San Francisco State College. Her articles on art education often appeared in Design magazine.

About the Mary Porter Sesnon Art Gallery
The Mary Porter Sesnon Art Gallery encourages interdisciplinary discourse through the lens of the arts. The gallery is located at Porter College above the koi pond at UC Santa Cruz, and is wheelchair accessible. Admission is free and metered parking is available at Porter College.  Gallery hours: Tuesday–Saturday, 12–5:00 p.m. and Wednesday, 12–8:00 p.m. The gallery is a short walk from the bus stop at Porter College. Group tours are available by appointment at 831-459-3606, or via email sesnon@ucsc.edu. Please visit our website for more information:http://arts.ucsc.edu/sesnon/.